In April, the government agreed to a joint drafting committee for a Lokpal Bill as they were ‘bound by duty‘ of the people to do so. They promised to discuss the points raised by Anna Hazare, Arvind Kejriwal and others and present a Lokpal Bill in the monsoon session of the parliament. August is here, four months have passed since Anna Hazare galvanized the whole nation with his fast, but has the last four months been anything but a hogwash by our politicians?

The talks never got anywhere because both sides blamed each other before and after every round of talks. The demand for televising the talks was never accepted by the government. Even after numerous round of talks, there was no consensus on the various contentious points of the Jan Lokpal Bill. This was very visible in the press conferences by both parties after every round of fresh talks. It was clear there was no trust between the two sides of the drafting committee, from the very beginning. Without mutual trust and respect, expecting a positive outcome from the committee was like expecting Tom and Jerry to become friends because they were on TV.

Finally, the government is ready to present a Lokpal Bill in the parliament. A bill which cannot tackle or investigate any of the serious corruption cases we have seen in recent times. It will not have jurisdiction to investigate the Commonwealth Games scam, Bellary mining scam or the Adarsh society scam as it can’t prosecute state government officials. It can’t investigate the 2G scam as PM and his office has been kept out of it. It can’t take your complaint for corruption against your traffic police officer, or the magistrate, or the collector in your district. Under it, you can not complain against any babu who refuses to process your file or pay you your pension without taking a cut from it. 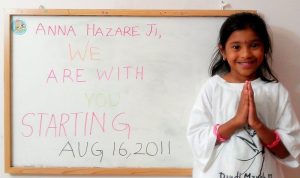 Are you? Will you?

The United Nations Convention Against Corruption (UNCAC) clearly mentions the terms based on which a country’s anti-corruption body should work. It asks for an independent body, which the Lokpal will not be because the CBI’s anti-vigilance wing will continue to function as usual, and under the government. Moreover, the Lokpal will be appointed by government officials themselves, creating a huge conflict of interest. If the government only wants to create a Lokpal for top level bureaucracy, how has the action over the last few months serve the public and the day to day corruption which everybody has to face.

Has the government here played both sides very cleverly to its own advantage? Did the setting up of a committee only a hogwash to dispel the growing public anger in support of Anna Hazare’s movement? Was it only to give an impression that ‘we care’ whereas the ground situation has hardly changed in the last few months? Is the government not trying to suppress Anna Hazare’s threat for a fast again by imposing section 144 in Delhi and refusing permission to his fast from Aug 16? Will they arrest him and force feed him? Will they not even allow an agitation to start this time?

But more importantly, the question is what will the public do? The government can put section 144 in Delhi, but not in every street of the country. They can arrest Anna Hazare, Arvind Kejriwal and Kiran Bedi, but can they arrest millions of people if they come out on the streets on Aug 16. Will the public again dispel this movement as ‘it will never work’ and go back to living their pity lives. As the next few weeks before Aug 16 pass, everybody needs to ask themselves just one question, “Do we want to support Anna Hazare while discussing with friends over coffee and watching him on TV, or do we have the balls to go out on the streets to really stand for what Anna Hazare is fighting for?”

And who is Anna Hazare fighting for, not for himself, but for us. Have we even lost the dignity to support the person who is fighting selflessly for us, or are our souls so dead already that we can dismiss Anna Hazare by terming his entire movement a ‘publicity exercise’??

I will end with a quote by Henry Louis Mencken – ” It is hard to believe that a man is telling the truth when you know that you would lie if you were in his place.”