Anna Hazare has been voted as the Person of the Year / The Indian of the Year by many news channels and newspapers recently. Even international press has noted him as one of the top news makers of the world in 2011. And why not? After all, this 74 year old Gandhian has changed the way Indians look at corruption and given all of us hope that this disease can be removed from our country. As I wrote in a poem, he has come as our Messenger of Hope in 2011. 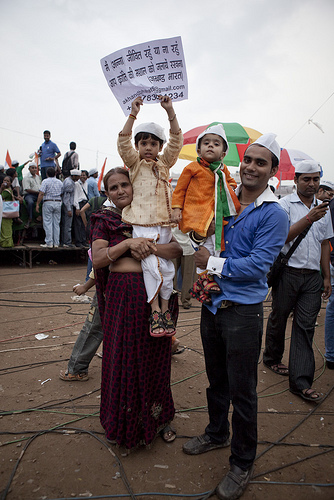 Anna has found support from people of all age groups

Anna Hazare has spend all his life promoting the decentralization of power in democracy and his asking for a Lokpal, free of any government control, is another step in this direction. By directly involving the people in his protests, and highlighting the point that the people are the real masters and the politicians only public servants elected by them, he has made it clear that they should proceed in accordance of the will of the public.

He and his team have taken the issue of Lokpal to the people in small towns and villages, holding live debates and educating the people about the various fine points of the Lokpal Bill and the importance of each clause. This has never happened before. Politicians have never bothered to debate with the people about the fine prints of any bill. By involving the public and making them aware of why and what they are doing, they have enabled a healthy environment which has resulted in the strengthening of the democratic institution.

If you would have asked anyone about the issue of corruption in India at the start of the year 2011, you would have only got hopelessness and pessimism in return. But in one year, Anna has changed that mood to one of hope and optimism. People have seen the power of peaceful protests and how they can pressurize the government to do their job properly. This must be the biggest take-away from this movement.

3. Uniting India for something other than Cricket

When India won the World Cup this year in April, people came out on the streets and danced and partied all night long. I wondered that do we have the same unity and patriotism for other issues which are much more important to our country. But my doubts were put to rest as during the two fast-unto-death’s which Anna underwent in April and August, he received huge support from people of all walks of life – from big cities to small towns and villages like. It was so glad to see the whole of India united and fighting for a cause that really matters to every one of us.

It was India who gave the world the weapon of peaceful protest – Satyagraha. But questions have been raised in recent times about its relevance in a 21st century world. But this movement put all such speculations to rest and showed that Gandhian methods of peaceful and non-violent protest are as much effective today as they were 70 years go. It was amazing to see young leaders like Arvind Kejriwal and others using technology (internet, social media) to gather support and spread their word quickly among people.

5. Patriotism and Power of Youth

A famous quote says that “A patriot must always be ready to defend his country against his government“. This movement has shown the power of youth and the importance of patriotism in democracy. By coming out in big numbers and by even courting arrest in huge numbers, the Indian youth has shown the importance of public protests in democracy. It has shown to the world that even a corrupt government will find it difficult to operate if the public is aware and ready to hold the government accountable for their actions.