We have seen a tremendous response to the peaceful protests triggered by Anna Hazare’s indefinite fast. People from all over the country, and even Indians living abroad, have shown their support for Anna Hazare and Jan Lokpal Bill by peacefully assembling and holding protest marches. He has united India across religions, caste, language or any other divisive factor. It is heartening to see India united for something other than cricket.

The number of people who have protested have been humungous by any standards. In Delhi and Mumbai each, more than a lakh people marched on 21 Aug 2011. Even in Bangalore, I have been hearing news of around 25000 or more people assembling daily. Similar stories are coming from other cities too, even smaller ones. While I don’t doubt that Anna has immensely resonated with the masses and given hope to millions of frustrated Indians, I also feel that going to a protest site is a very ‘easy and convenient‘ way of showing one’s support to Anna. A real test of commitment to Anna and his Gandhian methods of protest would be if we inculcate many of his preachings in our daily life.

Anna’s protest has been based on Gandhian principles of fasting and satyagraha. He has advocated the right of citizens to protest peacefully. He has asked people to pray for the ministers and the government. Gandhi ji also used fasting as a tool for punishing oneself so as to melt the hearts of your opponent and win him over to your side. But a big question to ask is, “Can the common man live by these principles?” 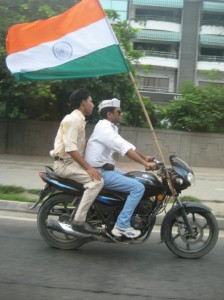 Can we truly live by Gandhian principles?

Gandhi’s whole philosophy is based on truth. In our everyday lives this would translate to questions like these

Gandhian methods of satyagraha and living a simple life resonates from the principle of sacrifice as a means to purify the opponent. In real life, this principle would translate to questions like –

According to Gandhi, non-violence doesn’t only mean such in action, it is also meant in thoughts and words. To understand this, we need to ask ourselves questions like – 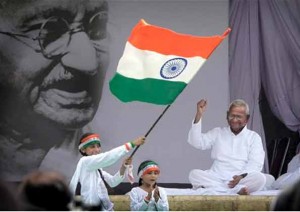 Hazare, Gandhi and the Tiranga Waving Kids - A Perfect Pic

Equality and No Discrimination

The whole of Gandhi’s life and Anna Hazare’s work in Maharashtra has emphasized on the removal of untouchability and discrimination on basis of caste, language and social factors. The people of Ralegan Sidhi (Anna’s village) call it as a family and not as a village.

What I am trying to say that while it is very easy and convenient to show and voice our support in Anna Hazare in a rally, it would be very demanding and challenging to practice what Anna is following in his daily life. We might have to suffer some short term difficulties and make some sacrifices, but we all know in our hearts that the long term benefits of such a life are always good and more fulfilling. And leave alone corruption, we would remove all or most of the ills that plague our society if we live by the principles by which Anna, and other Gandhi followers live by.

There is a famous Chinese proverb which I think has a very deep meaning which says – “Laws control the lesser man. Right conduct controls the greater one.” Can we answer YES to the questions I have listed above? Please leave your views and responses as comments below.. If there are any other questions you might want to add to the list, add them as comments too 🙂