Anna Hazare began his fast unto death yesterday in support of a stronger Jan Lokpal Bill to fight corruption. He is fasting in front of Jantar Mantar, Delhi and asking the government to create a joint committee with top members from the government and civil society to draft the bill. In support, thousands of people from over 400 cities in India and abroad are sitting on similar fasts. A few members are sitting on a fast unto death while many are doing relay fasting. People from all backgrounds, students, professionals, activists, are participating in the fast for one cause, a stronger anti-corruption bill. Many people are fasting from their work or home in support of Anna ji.

The media coverage of his fast has been very good and heartening to see. It will surely help in spreading awareness about the issue to the general public. Here are five reasons I think thousands have joined in support of “India Against Corruption” and why you should also join and contribute to this movement.

1. Fast for your country
We all fast, at different times, for our religion, some festival or for someone. Fasting holds a very important place in our culture, and we take pride in our traditions. This time, thousands are fasting for the country. People from different religions, castes, states have come together to fast for a disease which affects all of us, corruption. In these days, we rarely get to see the face of united India. We recently saw when the whole country celebrated the World Cup triumph and there were celebrations on the streets. Let us get behind Anna Hazare and fast for our country in the same spirit, and I have no doubt corruption (or any other issue) will be gone in no time if India unites and all Indians stand up for a just society.

2. Anna is doing this for us at 73 years
“At 73 years, Anna is not fasting for himself, he is fasting for the future of my kid. I will myself fast on 5th April for a day and ask my 5 year daughter also to skip a meal.” Rakesh, a software engineer said. And very rightly so, if Anna Hazare can fast until death for a corruption free future for us and our children, can’t we join him for one day in support. Seeing more and more people behind him will give Anna and India Against Corruption movement a lot of courage and confidence. It is also a chance for all of us to show we care about our future, the future of our kids and a corruption free India. 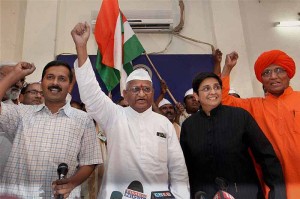 3. Spreading awareness
By fasting for one day, two days, alternate days, or whatever time and duration you are comfortable with, you can spread awareness among people around you about India Against Corruption movement. You can be a part of this movement by saying “I fast with Anna Hazare against corruption.” You can share and post about it on your mail, status messages on facebook, twitter, etc. We need more and more people behind this to put pressure on the government to bring a strong anti-corruption law, and each one of us can do our bit for it.

4. We only need a decent environment to live in
Most of us don’t want to be involved in politics or public affairs. And that is why we choose a government. We only need a fair society to live in. We need good roads to travel, good schools for our children, buses and trains for us to travel. We ask for nothing more. We are decent people only asking for a decent environment to live in. And we deserve it. The current environment has been polluted by corruption and the government has not taken steps to curb it. It is high time we realize our duties as citizens and peacefully demand what we deserve.

5. Corruption can, and must, end
Most of us see corruption as a problem which is deep rooted in our society and which can’t be eradicated. But history is proof that if committed citizens come together for change, anything is possible. The case of Hong Kong is one major example. Hong Kong was so corrupt during the 1960s that it was an open secret and a way of life. And the government seemed powerless to do anything about it. But in the early 1970s, one event after another triggered off a storm of public protests and a powerful and independent agency was setup to deal with corruption. The Independent Commission Against Corruption, or ICAC, was created in 1974 and now Hong Kong is one of the most cleanest and corruption free cities to work in. Similarly, it might look there is no end to the problem today, but seeing in perspective, this is our time to act and be the cause in the matter of a corruption free society.

So participate in the fast, for whatever duration you like and be a part of the movement. Spread the word to your friends, family, colleagues, neighbors, everyone. I will end with this quote by Edward Abbey – “A patriot must always be ready to defend his country against his government“.