Cricket and me go back a long way. I started watching cricket in the late 1980s, and am regularly following it and watching it since 1992. These days, following cricket matches, scores and records is not difficult. You get in-depth statistics on TV, and all records, matches, pictures and videos are available at the click of a mouse over the internet. I first started using internet in the year 2000. In this post I am going to write about how I used to follow cricket in the 1990s, which was the B.I. (Before Internet) era. And believe me, it was so much fun!! 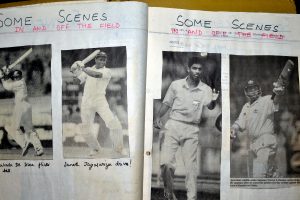 One of the page in my collage

In the 90s, the only way you would hear about news related to cricket was on TV and newspapers. Live cricket was available on TV, but the statistics were very few, TV cameras and crew were not so technically advanced. Even the third umpire was started only in 1992. Only before a major match or series started, you used to get the historic records between those teams, and about their players in newspapers. And after a match is over, the next day newspapers would be the only source of information about the match. 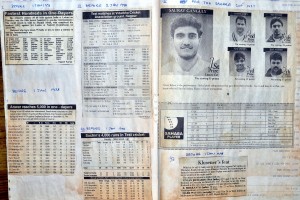 So how do you keep track of all the important cricketing happenings in those days? All the pictures, statistics, scorecards were not archived over the internet and it was impossible to find them if you miss the newspaper after the match. Simple, I started cutting out the photos, scorecards and statistics from newspapers and magazines and sticking them in a file in the form of picture collages. Very soon, the pages started to pile up, and I decided to put them in binders. I still have 3 such big binders with my collages at home, although the pages have turned yellow after almost 13-14 years. 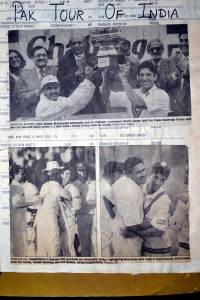 When Azharuddin used to be a cricketer

Due to this, I have images and records of that era which are sometimes difficult to find online even today. I am glad today I spend so much time doing all this, which if is so much fun seeing them now, imagine how much fun it would be to create them! I am also glad that I mom didn’t threw them away during the 4 years I was in Jaipur after school and in the last 6 years of my professional career, when I was mostly in Noida and Bangalore. To preserve the memories and archives, the last time I visited Delhi, I decided to capture those archives in my DSLR as the pages were getting very old and difficult to maintain in its real form. 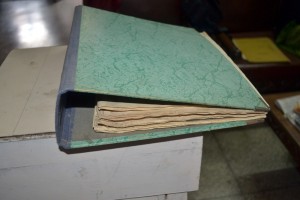 There are three such files

I hope you enjoy the few pics I have attached with this post. I will be attaching more in later posts.