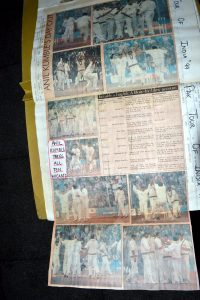 All his victims that day

If you have to pick the top 10, or even the top 5 cricketing moments in India’s cricket history, you can not miss the 10 wicket haul by Anil Kumble. His 10 for 74 in the second innings at Delhi vs Pakistan remains only the second instance of a bowler taking all 10 wickets in an innings. And boy he deserves it, for I have not seen a harder trier on the cricket field. And perhaps, he was won India the most test matches by any individual player. One important fact which many people miss is that he took those 10 wickets in one spell of 21.3 overs, conceding only 49 runs in the process.

It was a chilly February morning (8th Feb, 1999) and I remember watching the match on TV with my family members. At first when he started picking wickets and his deliveries started to zip and sizzle out of every crack at the Ferozshah Kotla, it was no surprise. But when he took his 7th wicket, I remember I jumped up and exclaimed, “Abe saari lega kya?” (Will he take all?) After all, I was a 15 year old back then, and didn’t even knew that someone has already taken 10 wickets once in history. It was like an unbelievable and unforgettable burst of emotions all over the place when he finally took Wasim Akram as his last victim. 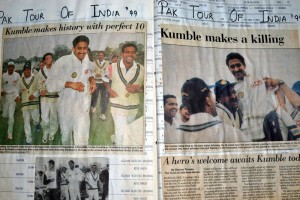 The celebrations at the Kotla

As I had written in my previous post, I used to archive cricket stories and news coming in newspapers and magazines back then. When I was digitizing my archives a few months ago, I could not miss reliving that moment as I found cutting newspaper after newspaper cutting marking the historic day. You can see some of them in this post. 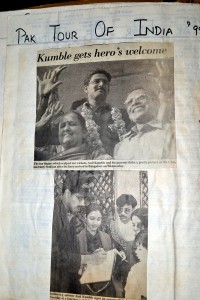 These images, more than anything, captures the man Anil Kumble was. He did not stop after this record breaking feat, instead he went on to reclaim almost every Indian bowling record. He became India’s first spinner to take 300 wickets in both Tests and ODIs, ending at 619 wickets only behind Muralitharan and Warne. He played many important knocks with the bat also, and no bowler could claim of getting his wicket easily.

To conclude, he was as much a player as he was an artist with the cricket ball. He relied on metronomic accuracy and steep bounce and change in pace off the pitch to tame his opponents. He, more than any spinner, relied more on bounce and change in pace than spin. His character and humility also makes him the wonderful person that he is, and he demonstrated that when he got the captaincy of the team in his last few years on that controversial Australian tour, and later as the captain of the Royal Challengers Bangalore IPL team. 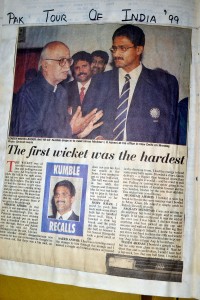