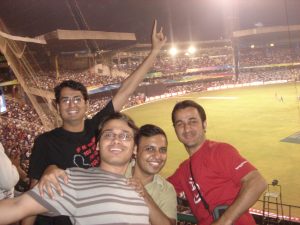 At the Chinnaswamy Stadium, Bangalore

I went to see a Champions League T20 Match between Delhi and Bangalore at the Chinnaswamy Stadium in Bangalore in 2009. What I saw there was a confirmation of what I have always heard – “India is a Cricket Mad Nation and Cricket is a Religion“. But the extent of it even surprised me. It was like seeing a pothole in the middle of Indian roads, you always knew it was there, but were still shaken by it!

Cricket!! This word means a lot (I mean “really LOT”) to cricket crazy Indians. In fact, how cricket unites India is amazing. And to me too. My earliest memory of cricket is watching Kapil Dev playing on my black and white TV set with my father sometimes. It was before Sachin Tendulkar came onto the scene in 1989, but I dont remember the exact year. My first properly followed cricket tournament was the 1992 world cup in Australia. Those were the days when pitches still used to be green, bowlers still used to get batsmen out by bowling amazing deliveries and a test matches series consisted of 5 matches. In other words, there used to be contest between bat and ball. Today, batsmen and bowlers are like USA and Iraq, with Iraq only allowed one bomb per day (aka one bouncer per over), and they will be attacked from air where they cant do anything (Powerplays).

Like many other Indians, I too dreamed to be a cricketer once (though I was never a good player). I used to play in school, near my home, even attended cricket coaching for sometime, but then the school books crushed my cricketing dreams. But watching and following cricket continued as ever. I have even watched a Test Match on television with missing a single ball. Yes, craziness can get to this level sometimes. But you can’t blame me if you get to see Kumble taking all 10 wickets in an innings, or India winning after a follow on, or Sachin gatecrashing Australia’s party at Sharjah.

My most amazing cricket memories are 1996 world cup and Sachin Tendulkar, Ganguly and Dravid making their debut in 1996 in England, Sachin and Ganguly opening on ODIs, Kumble taking all 10 in an innings at Kotla, Test Victory over Australia after following on, Sachin’s back to back centuries in Sharjah and his duet with Shane Warne, Sehwag hitting his triple hundreds in amazing style and many more memories of Lara, Warne, Steve Waugh, Wasim Akram and other greats.

Looking back at the last 2 decades, cricket is still played with bat and ball, but a lot have changed. Test Matches are less, there are no practice matches on tour, ODIs and T20 rule the roost these days. Players are refusing board contracts and preferring to play as freelancers, making more money by playing in cash rich T20 tourneys.. Many have retired from Test Cricket to focus on T20s and ODIs… Money has come into cricket, and we (read BCCI) have started it. Lalit Modi has changed the game with his innovations. Players rely more on power than technique now….

I don’t know what the future has in store, but I hope that cricket still gives chance for bowlers like Warne, Kumble, Akram, McGrath to flourish and bowling remain an important part of cricket and not overshadowed by batsmen. I will continue to follow cricket, but the pleasure of watching a Rahul Dravid cover drive or a Sachin Tendulkar straight drive is much more than watching Sehwag or Dhoni or Symonds in bang-bang mode.﻿