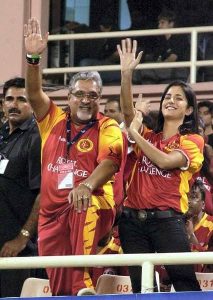 The IPL has taken the country by storm for the third year in the running. But more so, it has taken cricket by storm. If you ask somebody what is IPL and he replies – “It is India’s domestic T20 cricket tournament”, you can’t be more wrong. IPL is the perfect mixture of glamour, fun and entertainment making it a complete package for cricket and bollywood crazy Indians. No doubt it is such a success in a country like ours, where cricket, apart from being a sport, also unites Indians like nothing else. T20s will continue after the IPL too (for the rest of the year), but an IPL match will only come back next year.

1. Cheerleaders – Cheerleading is basically an US phenomena that include elements of tumbling, dance, cheers, jumps and stunting to direct spectators of events to cheer. The cheerleaders in IPL have also been imported from US, and dressed in “attractive” dressing, are as much an attraction in the stadium, as the match itself. As expected, some self-righteous Indians have made a controversy out of their clothing and moves, but that is for another post. (You can read about an earlier controversy surrounding the IPL here..)

2. Time Outs – Year 2009 saw the IPL moving to South Africa, and to compensate for lost revenues, Lalit Modi introduced the timeout of seven and a half minutes after 10 overs of each innings to show more ads in the limited time that T20 has for advertisers. Obviously, he called it the strategy break for teams to restrategise… In 2010, IPL modified the concept to introduce two timeouts in each innings of total five minutes duration. And the timing was left to batting and fielding sides to chose. So, more unpredictability and more eyeballs for advertisers. And the time-out itself was sponsored by a Mobile Handset company.

3. Sponsored Commentary – Commentary was once a boring job, just reporting on the events of the match. But IPL made it compulsory for commentators to brand a six as a “DLF Maximum“, a catch as a “Karbonn Kamaal Catch“, any interesting moment as a “Citi Moment of Success“, and so on. In the future there could also be an “XYZ Special Wicket” or a “ABC Amazing run-out”. It can stretch as far as the imagination goes. Looks like it is never enough when it comes to advertising.

4. Microphones – Interesting placement of cameras and microphones have added a new dimension to cricket. IPL has, for the first time, involved the umpires in the game. Umpires, at the start of the match, are wired up with the DJ at the stadium, and hence, instead of just calling a dull “play“, he starts the match with asking “Are you ready batsman? Are you ready bowler? Are you ready Bangalore?” which is heard and cheered by the whole stadium and TV viewers.

5. Cameras – Interesting placement of cameras like the overhead rolling camera view in 2009 and the cameras on the “MRF” blimp in 2010 have given interesting angles for viewers to see their favorite players on TV and on multiple large screens on the stadium itself.

6. IPL Nights – As you have seen and read in newspapers, IPL matches are often followed by IPL Nights, which are big parties which happen after the match. These parties include everything from fashion shows to music to booze and continue till early in the morning. There are cricketers, team owners, businessmen, models and bollywood celebrities all enjoying and relaxing after the match. There are Rs 40,000/- tickets which allow you an exclusive entry to these parties, apart from watching the match from the best location in the stadium.

7. Youtube’s Fun Feed – This is one thing which I think most of you must have missed. IPL is streaming its matches live (well… almost live) on youtube, and apart from the usual television feed, there is another feed called the “Fun Feed“. This is basically live telecast of the match but from a totally entertainment point of view. IPL has a former Miss Universe hosting this feed, and it includes interviews of Team Owners, Celebrities, the cheerleaders, players, and of spectators about the match. Even the match is shown from different interesting camera angles. In short, the focus is more on the happenings in the stadium (entertainment) apart from the cricket itself.

If you have noticed some other interesting stuff going on in IPL matches which I have missed, make sure to drop in as comments below…﻿