Australia had their best team ever in 2001 under Steve Waugh. They had won the previous 16 test matches on a trot, including the 1st test against India at Mumbai. The 2nd test match was to begin on 11 Mar at the Eden Park, Kolkata and Steve Waugh was finally going to conquer the final frontier. Australia batted first and started in trademark fashion, reaching 193/1 at tea in 53 overs. But a very young Harbhajan Singh had other plans. After tea, his deliveries were like bombs for the Australians. Ponting, Gilchrist and Warne fell in successive balls, giving Bhajji a hat-trick and Australia slid to 291/8 at the end of play.

India would have thought (and wanted) to get them out early 2nd way, but Steve Waugh, the captain was still batting with Jason Gillespie. India’s hopes faded out soon, as Waugh got to his century and Australia to 400. He kept full confidence in Gillespie and McGrath and rotated strike with them, unlike other players who try to take full strike with tail enders. The partnership of 133 for the 9th wicket and 43 runs for the last wicket showed the world his confidence in his men. Australia finally finished at 445 with Bhajji taking 7.

India started in trademark fashion, losing their first wicket with no run on the scorecard. Those days Dravid was an opener who did not open in most of the matches he played. The conquering Australians had McGrath, Gillespie and Warne and India’s score of 128/8 at the end of day 2’s play was no surprise. Australia were looking at their 17th straight win and a test series win in India after some three decades. On day 3, India folded out of 171, and as expected, Australia imposed the follow on, unaware of what awaited them. India finished day 3 at 254/4, still 20 runs behind Australia’s first innings total and their last recognized pair at the crease. 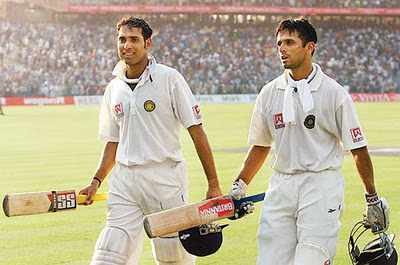 Walking off after batting the whole of Day 4

March 14, 2001 would be the longest day in test cricket for Australia. For, India finished day 4 at 589/4. 90 overs, 0 wickets, 335 runs. Well, the last recognized pair of India have batted the whole day. Laxman made the highest individual score by an Indian going past Gavaskar’s 236. Dravid gave him able company at the other end. Both played some exquisite shots all round the park that day, and even McGrath and Warne were seen helpless. Laxman’s wristy strokes and Dravid’s class eroded Australia’s pride in that one day like a desert storm. Atleast India would get a draw now, the whole country was hoping.

On day 5, Ganguly declared India’s second innings at 657/7, giving Australia a target of 384 runs. Whole India and the cricket experts thought why did not he just bat till draw was the only outcome possible. But the south paw had other plans, he was thinking of winning the test match after following-on. Only 2 times have that happened before in the history of test cricket, and guess what, Australia have lost against England both the times. Some 75,000 people have turned up at the Eden Gardens on the final day to watch history being made. At tea, Australia were 161/3 in 43 overs, will all 3 results still possible. After tea, Harbhajan removed Waugh and Ponting in quick succession. The score read 166/5. Enter Tendulkar, with his off breaks, leg breaks and the occasional seam delivery. Gilchrist, Hayden and Warne just could not figure out what was happening, with all three falling lbw to Tendulkar. The score now read 174/8. Bhajji completed the formalities and Australia folded out of 212, handing India a victory by 171 runs.

Bhajji’s 13 wickets in the match (including a hat-trick), Laxman’s 281 and Dravid’s 180 in a partnership of 376 runs for the 5th wicket, and Tendulkar’s 3 wickets in the final session, all played their part in triggering the Australian collapse when they lost 7 wickets for 46 runs. Whole of Kolkata and India was celebrating like they have won the world cup. And Steve Waugh was given a high voltage shock by the Indian Team led by Ganguly. They went on to lost the final match in Chennai and the final frontier remained unconquered for Australia and Steve Waugh.