It was December 2009, and although I was still working on SaleRaja, it was now more as a burden than for interest. I was stumbling in the timelines for feature changes that I had set myself, my enthusiasm was low and I was unsure about what the future had in store for me and SaleRaja. Finally, after managing SaleRaja alone for the whole of 2009, I decided to let it go and focus on my career through a job. That means I was soon looking for a job when at one time I thought that I would not have to find another job ever. My motivation levels were at an all-time low, and I was confused and unsure about what next?

But I decided to take a break from entrepreneurship, focus on my career through a normal job, and come back to entrepreneurship some years later. It was not an easy decision, and it took me around six months of consideration to finally stop running SaleRaja as a business. Looking back now, 16 months after that decision, I can laugh over those uncertain times and say that it might be one of the best decisions I ever took. The first few months were tough, as I was confused, low on confidence and struggling to find a direction in life. But after that, and till now, the going has been wonderful. I have done things in the last one year that I never thought I could, and would do, ever. I am listing below everything for which I am really grateful in this past year.

Started sumit4all.com
I had always been good at writing, but used my writing skills only when writing letters, emails, or when somebody asked my help with it. Hence, in January 2010, I started sumit4all.com as a blog where I would write about different things I feel about, my experiences, my life, etc. I could only do so because I was free and there were no SaleRaja deadlines to follow. It was not easy at first, and I was not able to write more than one post per week. Writing was like a pain in the ass and I had to put in a lot of concentration, patience and effort to research about a topic and write an article. But slowly and steadily, I started enjoying writing and I am writing around 15 articles every month now. Many of my articles have been well received and been shared a lot through social media like facebook, twitter, etc. Now I have plans of writing and getting a book published in 5 years.

Reading Books
I started reading books during the last few months of 2009 when I was struggling with SaleRaja, but I made it regular only after Jan 2010. I started reading two books every month and have been following this practice till now. I have read autobiographies, self help books, and a few business and fiction books too. These books have allowed me to take a peek into the stories of so many men and women, and the perspective of life I got after that have been amazing. I have a small, but good library now and have a lot of books in my to-read list. 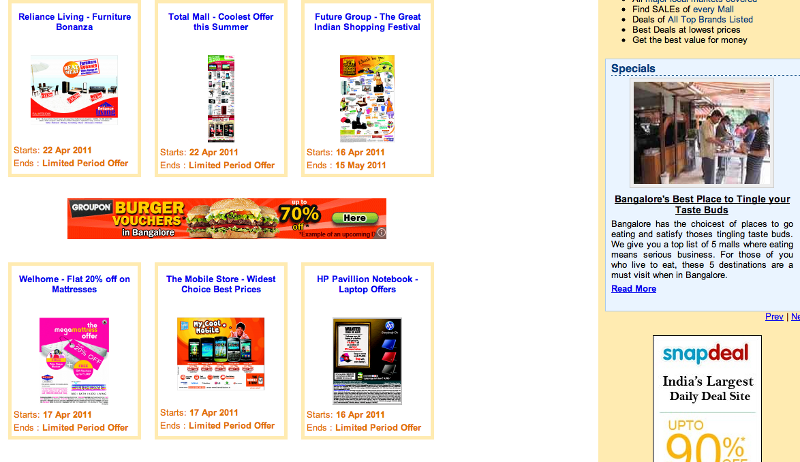 Landmark Education
Right after SaleRaja, I was looking for some kind of education to fill in the gaps in my skills which I had found during my stint with SaleRaja. I looked at MBA options, some short time courses done by IIMs and other B-schools, but nothing interested me. I started finding groups online related to business, entrepreneurship and started meeting like minded people in Bangalore, but that also didn’t sustain. Then I enrolled myself in the various programs of Landmark Education since July 2010, and am continuing this education even now. This could not have come at a better time for me. It has helped me get my confidence to a new level and clear a lot of doubts about life. Also, I met a lot of people through Landmark Education who are very successful and leading wonderful lives, providing inspiration and support. I can without doubt say this last seven-eight months of Landmark has been the best education of my life. It is ironical how we keep studying about specific skills / courses but never study anything about life and living in general.

Joined Yahoo
Yahoo, Google and a few more are the dream companies of many people. I was open to both startups and big companies when I started looking for a job again, and found myself in Yahoo in March 2010. Having spent the last one year here, it has given me my first experience of working in a multinational company. Dealing with different people and teams from Singapore, Brazil, Europe and US over the last year has given me much needed exposure about how work happens across continents, cultures and languages. In the future too, I am sure there is a lot I can gain from Yahoo and working here.

Waste Management Activities
In September 2010, I got intrigued by the idea of waste management and thought of a business idea around it. Since starting a new business was out of question, I got involved in waste management related activities in Bangalore to know more about its details. I took an initiative to implement waste management in apartments starting November 2011 and have got a decent response from that. I have met a lot of people who are already working in this area and am totally amazed by their energy levels. They have been a great inspiration about how to to live life responsibly. It also gave me the confidence to take new initiatives in any area, irrespective of my skills and knowledge in that area.

Dandi March 2
In March 2011, I got a chance to organize an anti-corruption walk in Bangalore. In less than three weeks, I put together a team and on 26 March, over 400 people walked over 11km under 4 hours to make this walk a huge success. These three weeks were one of the best of my life, with all my learnings in the past year put to test. I got confidence like never before after this event, and the Anna Hazare magic caught the attention of the whole nation soon after that. It was during this time only that some articles written by me attracted huge traffic from google as people searched for anti-corruption keywords on the internet. The success of this walk is the reason nothing seems impossible now to me.

What Next?
Although I have gained a lot in the last one year, I very clearly see a long journey ahead with lots to learn and do. I am in the most calm and peaceful state of mind that I have ever been, and with confidence that I can take on anything now. It has not been all uphill too in the last year, and I have tasted some setbacks too, but I have surprised myself with how well I have handled myself during these breakdowns. I have taken the lessons from the mistakes I have committed without getting frustrated and upset, and moved on to newer things. For the remaining of 2011, I have atleast two more initiatives lined up in the social space, so watch out in the coming weeks for more updates 🙂