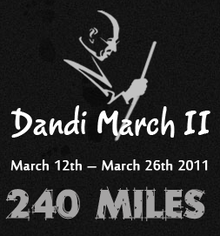 For all those who can recall their history lessons in school, Dandi March was a 24 day, 240 mile (390 km) march to produce salt without paying the tax. It is also known as Salt Satyagraha, led by Gandhi from his Sabarmati Ashram to the sea coast near Dandi. Dandi March was a very important part of the Indian Independence Movement. It was a non-violent protest against the British monopoly of salt in India, and it triggered the Civil Disobedience Movement later. It was done from 12 March to April 6, 1930.

Now, 81 years have passed as I write this today on 11 March 2011. We have been independent for over 63 years now, and economically independent for 20 years (since the 1991 economic reforms). But we are still not free socially. We are still not the India that Gandhiji dreamt of. An India without poverty and hunger, an India where everybody has equal opportunity to lead the kind of lives they want. We are still not free from corruption, which is one of the most menacing problems India faces in the 21st century. The Adarsh Society scam, Commonwealth Games scam and the 2G scam have rocked the nation in the recent months, causing the loss of over 60 billion dollars.

Dandi March 2 is a march organized by a group of NRIs living in the United States of America inspired by the original march by Gandhiji. It is a 240 mile walk in the US against corruption in India from 12 March to 26 March 2011. Starting at Martin Luther King Jr. Memorial Park, San Diego, California March 12, “Dandi March II” goes through Los Angeles and ends March 26 at Gandhi Statue, San Francisco. The dates coincide with the dates Gandhi did his historic march in 1930. Every major city in US, 10 cities in India and 8 other countries are organizing support events on 26 March to extend their support for the full 240 mile walk in US. The agenda is to push the government to enact Jan Lokpal Bill which is drafted to free India from the clutches of corruption by social activists like Kiran Bedi, Anna Hazare, Arvind Kejriwal, etc. 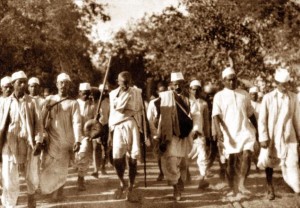 The support events on 26 March are being organized in cities like Bangalore, Coimbatore, Hyderabad, Chennai, Kakinada, Kolkata, Nagpur, Mumbai, Varanasi and Ahmedabad. In the US, Indians are walking in Atlanta, Boston, Chicago, Dallas, Detroit, Houston, New Jersey, Washington DC and Seattle, apart from the main march from San Diego to San Francisco. Internationally, support marches are happening in London, Singapore, Finland, Germany, etc. More information about the event can be found at http://www.dandimarch2.org. The route details for the full march can be found here and all the event details for different cities can be found here.

The facebook page for the march is http://www.facebook.com/DandiMarch2?sk=info where you can find all the important information about the march. The Bangalore support march on 26 March can be seen at http://www.facebook.com/event.php?eid=194657080556635 Accept the event invite to do your bit for a corruption free India. We are walking around 15 kms in Bangalore, join us for 1km, 2km, 5km or whatever is comfortable to you.