The only people I have ever known to have no problems are in the cemetery, says Dr. Norman Vincent Peale. If this reality hasn’t hit you in the face, let me make it clear – If you are alive, you will have problems and obstacles in your life. It is as much a truth as the air we breathe, and the earth we walk on. Yet we live all our lives avoiding problems or solving them. What an irony?

When Lance Armstrong says that cancer was the best thing that ever happened to him, and that if he would have to choose between his Tour de France wins and cancer, he would choose cancer, he is saying a lot. He won the Tour de France seven times after recovering from cancer to give a light of hope to the millions of cancer patients out there, and his tryst with cancer has given him the purpose of his life, the LiveStrong Foundation.

Even in the Mahabharata, Krishna saw fighting as an opportunity which Arjuna saw as a problem. The way we see the problem is the real problem, and if every time we face a problem we ask ourselves – “What is the opportunity here?”, we can open closed doors of new opportunities which can enliven us and the people around us. 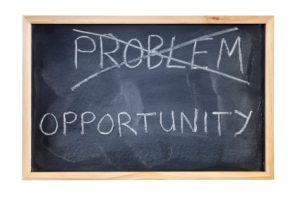 If we can learn to do this everytime, our life is taken care of

Let’s take an example. In the current tough economy, let’s say one is out of a job. It might look as a problem, but we can ask “What is the opportunity here?”. What are the answers we can get? Being without a job could actually be an opportunity to start a business, or to go back to study or take some time off to travel. When we are in a job, we are often too stuck in our comfort zone that we don’t even look at what all we are capable of. But when we are shocked by some so-called problem, we often are forced to do what we never thought we could, and that always leaves behind a better version of us.

In times when we think the whole world is against us, what we need is the maturity to seek the hidden opportunity. We also need the patience which will allow us to wait and bide time till we can see the opportunity hidden in that obstacle. We might not be able to see the opportunity at that time, but if we can show faith in life, we will only come out stronger and better prepared for the future. I will end with this quote by John Ruskin –
“The highest reward for man’s toil is not what he gets for it, but what he becomes by it.”