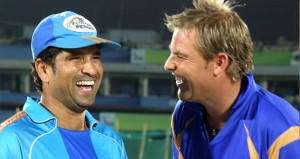 The year was 1998, and the Australian cricket team was touring India. They were led by Mark Taylor, and had players like Mark and Steve Waugh, Ponting, Warne, Slater, Healy in their team. That was the time when Navjot Singh Sidhu was on the cricket field and not in the commentary box or TV studios. India was led by Azharuddin, and the team had players like Mongia (Nayan, not Dinesh), Srinath, Kumble, and others…. This series had been termed as the “Sachin v Warne” series already. And what was going to happen in the forthcoming weeks was something special.

Australia first played a 3 day game against a Mumbai team featuring Sachin Tendulkar at Mumbai. The world beaters v an Indian Ranji team. Well, Sachin had other plans. There were reports that he made local legspinners bowl to him turning leg spinners outside his leg stump before the Aussies arrive to prepare for the Warne onslaught. Coming back to the 3 day match, Australia lost it by 10 wickets inside 3 days as Sachin Ramesh Tendulkar slammed his maiden first class double century. Warne had been taken for 111 in his 16 overs without getting a wicket. The same story continued in the test series, with memories of Sachin sweeping Warne over square leg perfectly stored in the memories of every Indian fan forever. India won the series 2-1, and the contest between Sachin and Warne was a no contest at all.

The stage turned to Sharjah for a one day tournament a few weeks later involving India, Australia and New Zealand. Australia were trying new players like Adam Gilchrist and made Steve Waugh their captain for the one dayers. India won the tournament with Sachin scoring back to back centuries in the last 2 matches and decimating the Australian bowling attack all by himself. Steve Waugh remarked, “We lost to a better Man“. Shane Warne said he would have nightmares of Sachin sweeping him over square leg for six. Such was the impact of Sachin Tendulkar on these two series. I always backed Sachin and was delighted to see Shane Warne being hit all around the ground.

Exactly 10 years later, in the April of 2008, a man named Lalit Modi organized the IPL, a league of T20 matches between 8 Indian domestic teams. Suddenly, there were foreign players playing for local teams. Indians rejected the concept first (as every new innovation is dealt with in the beginning), giving reasons like how can you cheer a foreigner against an Indian player and how can one cheer for cities when we are only used to see cricket between nations. Still, IPL 2008, with all its innovations, was a huge success. An unknown and week (on paper) team, Rajasthan Royals, comprising of many unknown players and led by Shane Warne won the inaugural IPL tournament. The Shane Warne who every Indian always saw as the Villain because of his rivalry with Sachin God Tendulkar, inspired a bunch of unknown players to the title. For the first time, I (and other Indians) saw him as a cricketer rather than as an Australian. He had done the same thing while leading Hampshire to the title in England a few years ago. And everybody was talking about his bowling and captaincy. Apart from this, he was the second highest wicket taker in the tournament, and he was only 38 years old.

Just a few days back, on 11 April 2010, Mumbai faced Rajasthan Royals. Altough they have clashed many times in IPL before, a true Sachin v Warne showdown has never happened. But this time, Sachin faced the full 4 over spell bowled by Warne, and like 12 years ago, let Warne have no impact on him. But I was not amused. The same players facing off against each other, and the same result as 12 years ago. But this time, I was cheering for Shane Warne and not Sachin. And I am not alone. Millions of Indians found it surprising when they supported Warne in this battle. They are certainly huge fans of Sachin themselves (as am I), but something has changed that made our support  go for Shane Warne and not for Sachin. For the first time, we are seeing Shane Warne as a cricketer rather than as a member of the opposing team. For the first time, we are seeing cricket being played where nationalities no longer figured, and patriotic sentiments gave way for pure cricketing talent. What has IPL done? Lalit Modi, what have you done?

When IPL originated, critics always pointed out that city rivalries are not possible in India, where cricket evokes nationalist feelings and is such a uniting factor. It was hard to imagine people cheering for Gilchrist hitting Zaheer Khan for a six or to see Shaun Tait bowl out Rahul Dravid with a yorker, and to do the opposite one month later when the players play for their respective countries. But IPL has managed to do that. And it has only started. We are still in the very beginning years of this revolutionary phase in cricket history. How cricket will be seen by the next generation will be determined in the next 2-3 years as IPL and T20 settles down. More so, it is important that how all the media attention, business houses and glamor parties will fit together and form a “cricketainment” option for the whole world to see. Twenty20 leagues could be the future of the game, and it will also revolutionize one day cricket as one day cricket did to test cricket. All three formats of the game are here to co-exist, an absolute delight for the cricket lovers!!