It was sometime in 2007, or 2008, when I was the team leader of the 99acres team in Noida. This incident happened during a planning meeting for future projects in 99acres which was attended by many senior people in the company. Product Managers, Sales Heads, Business Heads of 99acres and Jeevansathi, and I think even our COO was present during that meeting, not sure about him though. Being the one handling the tech team, I was giving time estimates for the different ideas / changes the top guns had on their list. It was one such idea for which I suggested a time estimation and somebody said that he thinks it should be done in these many days (obviously less than mine). As it was only an estimation, I thought about it a little more and reduced my estimation by a few days. At this point, Deepali Singh, who was the business head of 99acres said “Theek Theek Laga Lo”. The whole room burst into laughter at that point and it was a moment I still remember to this day. (“Theek Theek Laga Lo” is a Hindi slang for “Give me a right price” which is commonly used while bargaining for price while shopping in local markets of Delhi)

What I learned from this incident is that having fun and keeping a light atmosphere is very important, even when discussing the most serious of issues and problems. It was the same that day, I was a little nervous and was taking things too seriously. After this incident, the whole mood in the room lightened up and I was lot more relaxed which indeed helped me to do my job better, in this case, giving better estimations. 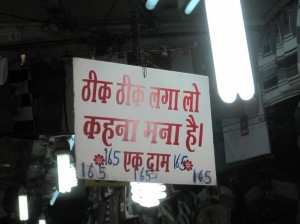 Though normally I am fun loving and keep on doing something or other for fun, I have often seen myself getting too serious during important meetings, specifically when there are people higher up in the hierarchy attending it. Deepali’s comment diffused the tension and put me at ease highlighting how important it is to have fun at the workplace. I have always believed that if you are having fun while doing your work, then you will be more creative, more productive, will be able to take better decisions and will get along well with co-workers.

A pleasant and happy work culture was one of the most important points that I saw during the three years I worked with InfoEdge. People were not colleagues there, they were friends. Now, even after 2.5 years of leaving InfoEdge, I am in regular touch with all the members of my team and many others too, and I make it a point to meet them whenever I am in Delhi. It wont be wrong to say that I got many friends for life from those three years of working there. All credit to the fun-filled work environment there.

Remembering what we used to do within our team for fun, we used to go out for informal team lunches quite often. Many times, we used to get out just for having ice-cream at the nearby Nirulas or for sipping a glass of juice at a roadside juice seller. There were a few dhabas outside the office which had become popular meeting points over tea and maggi noodels. Within my team we used to play a lot of pranks with each other. There were times when Poorva (a teammate) used to hear random screams from her laptop while coding (thanks to me taking an ssh into her machine and remotely executing a scream mp3 file I have put there), and there were times when I used to return to my seat to find my laptop missing as my teammates have hidden it for revenge 😉

Taking it one step further, I try to apply the same approach to life too. No matter what the situation is, how serious it is, it always helps to take it lightly and have fun along the way. Life is a series of ups and downs, and it is as important to enjoy the downs as it is to cherish the ups. It is all part of the game called life. I will end with a quote –