Narendra Modi seems to be the most popular topic on news channels these days. From the old sermons over the 2002 riots to his statements, he is never away from controversy and news. While he might be an enigma, and his personality might be very polarizing, I think we should all support him not for his speeches, his party or his influence, but for the results he has produced in Gujarat. Unfortunately, none of the media channels seem to highlight the progress in Gujarat in a maddening race for TRPs and viewership. It seems people are more interested in watching meaningless debates between a BJP and a Congress politician than knowing about his work and how they can contribute to the state.

1. Gujarat has 5% of India’s population but amounts to 21% of India’s exports and gets 20% of the total investment India gets.
2. Modi has an entire canal of length 19000 km (Sanand Branch Canal) of the Sardar Sarovar Project embedded with solar cells to generate electricity. This will generate electricity and prevent water evaporation from the canal. It is operational with 1MW electricity output and expected to generate 2200 MW of power when completed.
3. According to a World Bank, Gujarat roads are an example of best practices in road management and are closest to international standards. While the Delhi BRT system has been a big failure, nobody is talking about the Ahmedabad BRT which is a big success with 125,000 people using it daily (even with higher ticketing prices than normal buses). While Delhi has 6 km of BRT, it is spread over 67km and will have 115km when it is completed in 2015. The Indian Government (yes, the one with UPA at power) has given the “Best Mass Rapid Transport System” award in 2009, “Best Innovation Award in Urban Mobility” award in 2010 and “Award of Excellence for best IMTS project” in 2011 to the Ahmedabad BRTS system, apart from a host of international awards. But nobody is talking about that. 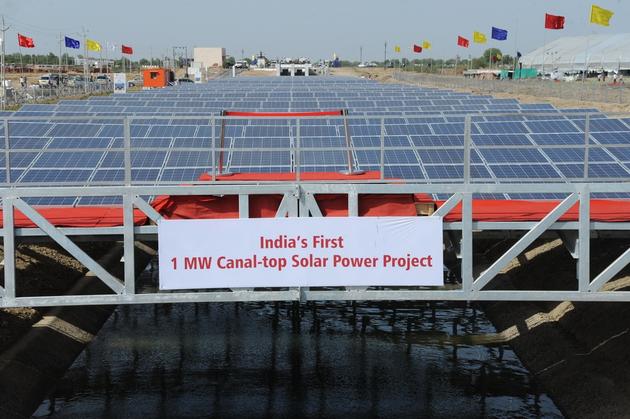 4. Kutch was reduced to rubble after the 2001 earthquake. It is now a bustling industrial hub.
5. Gujarat has 100% power in rural areas too. It has improved the quality of life and business, and halved the government given power subsidy. Yes, reduced to half. While other governments has been demanding votes for doling out subsidies, Gujarat makes a scheme after which subsidy was halved. You decide which is better? And that scheme (Jyotigram Yojana) is set to be adopted by Govt of India now.
6. According to the infamous Tendulkar report on poverty, 30% of India is below poverty line. According to the same standards, Gujarat’s figure was at 32% in 2004 but is now at 23%.
7. Gujarat has the biggest gas pipeline networks in India, has the most CNG outlets in the country and consumes more than a third of the total gas consumed by India. It has 2200km gas grid and has a more than 75% share in industrial PNG connections (3100 of 4000 PNG connections in India are in Gujarat).