Today, over 35% of our population is below the age of 20. By 2020, it is expected that 325 million people in India will reach working age, which will be the largest in the world. This will come at a time when the rest of the developed world will be faced with an ageing population. It is estimated that by 2020, US will be short of 17 million people of working age, China by 10 million, Japan by 9 million and Russia by 6 million. At the same time, India will have a surplus of 47 million working people. Even when compared to developing countries, Brazil’s working population is set to grow by 12%, China’s by 1%, Russia’s will decline by 18%, while ours will grow by 30%. This is the reason Goldman Sachs predicted that only India can maintain a 5% growth rate until 2050.

But are our youth unemployable?
Economic growth require not just a large working population, but people who are trained and skilled to work in different industries. Many industries have remarked that people coming out of colleges and universities in India are not employable and they have to give them skills training before they start their work. This adds strain on the industry. Our adult illiteracy levels are also a big concern, which stands at 39%. 25 million children are out of school in India, out of a total of 100 million out of school children in the world. We need to work on our policies to make sure those who are still in school and colleges get the best education and be ready for their opportunity when it arrives. 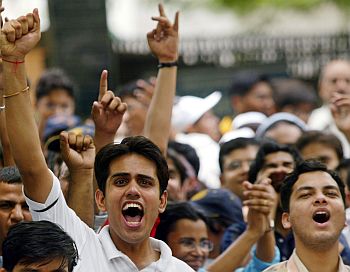 Youngistan - Will it mean a boon or a bane for us?

Demands of this population
With a huge working population will also come a huge consumption boom, as it has happened in China. China accounts for 20% of world’s consumption of aluminum, 35% of the global demand of steel and coal, and 45% of the worldwide cement purchase. The future demands of China and India’s population will put a lot of burden to the resources of these two countries. How these two countries manage resources like water, cultivable land, oil and energy needs will be critical. The demands on the environment cannot be overlooked either. If we follow the same model as followed by American and European development, environmental deterioration will end up destroying the whole planet. Global Warming is already a big problem. The challenge for India will not only be economic growth, but also make it sustainable and bearable for the environment.

Taking care of our population
Our infrastructure today is no way capable of taking proper care of our ever increasing population. Human development must go hand in hand with population growth. More than 25% of our urban population lives without sanitation and 24% lives without access to tap water. We need 66,000 primary schools and 3000 new health centres every year to cater to our population growth. Food production also has to be increased by 3% every year to meet their needs.

We can’t ignore the ill-effects of population growth
India cannot afford to ignore what will happen with unsustainable economic and population growth. We need to use our technological skills and replace our age-old systems with innovations to reduce the resource burden. We need innovative and sustainable solutions in energy, transportation, sanitation, manufacturing, and agriculture. We are a nation of great talent, and we stand before times which might be our big opportunity to take the leap in the world order but we also face significant challenges. If we take all this into consideration NOW, and frame policies and act responsibly, I am sure we are capable of transforming this huge young population into a boon rather than a bane.