The recent crisis and revolution in Egypt forced their President of 30 years, Hosni Mubarak to resign and pave the way for a civilian government. Egypt has remained under emergency rule ever since Hosni Mubarak came to power three decades ago and he has ruled Egypt with an iron fist since then. But all it took was 18 days of protests by the Egyptian public at the symbolic Tahrir square that forced Mubarak to relent to the demands. Though hundreds of lives were lost in the protests, it marks the sacrifice people have given for demanding their right to a democratic government. With the world media focussed on Egypt, and social media like Facebook and Twitter making it impossible to stop what was happening in Egypt from coming out, it was impossible to crush the rebellion as had been done in China and other countries earlier.

In our country too, we have seen protests in the past. In fact, such peaceful protests all over the world have been inspired by none other than our own Bapu. He lead the country in peaceful protests against the British rule, inspiring leaders like Martin Luther King Jr and Nelson Mandela in the process. Our forefathers had come together and raised their voice in unity for their right of self governance from the British. We can say that we have inherited the ability to protest peacefully to demand our rights from the government. After independence too, we have seen protests during the emergency period in the 1970s and the recent anti-reservation protests in 2006 where students marched against the governments decision to implement 27% caste based reservation in educational institutions.

Today we live in a democratic country. As a country, we are governed by the constitution which was framed in 1949. Unlike Egypt, we have a government which is answerable to its citizens, and which in fact is chosen by its citizens. Our democracy, as with most democracies, came into being after an era of protests. Protesting for our rights and for what is rightfully ours is not only within our rights as per the constitution, it is also our duty as responsible citizens. Considering the current state of our society which I have mentioned in previous posts like “The India of Today” and “The Irony of living in India”, we more than anyone else need a public uprising and peaceful protests under the principles of Gandhi and Nehru. We have an obligation to our forefathers, and to our children and grand children, to give them an India which our forefathers dreamed of. And there is no reason we can not make the current government and its officials accountable for their responsibilities towards the nation.

Although the principles of such a revolution will be the same as followed during the Independence struggle, the objective would be very different. India protested against a foreign rule before Independence, for the right of self-governance. However, right now we have self governance, but any protest will be to stop the rampant corruption in the system and ensuring our constitution doesn’t only remain a text. The protest should be to make the government officials accountable to the people and to the constitution. The protest could include appealing to the courts, making use of the law as it exists today to make sure we are not denied of our fundamental rights. If these modes of protest won’t work, we can turn to public protest. This can be in the form of strikes, civil disobedience or plain old gatherings to make the government take notice. 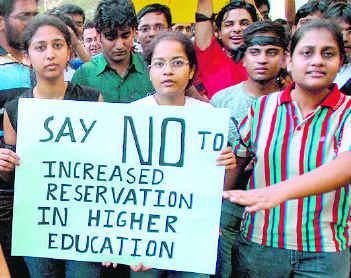 We have seen some protest in the last decade, like after the Jessica Lall murder case, after the reservation decision by the HRD ministry, after the Mumbai terror attacks and most recently, in Jammu and Kashmir. All these protests have been triggered by some event or tragedy which has shook the nation emotionally. However, the rampant corruption and neglect of civilians by the politicians and babus has continued ever since independence. They are supposed to be public servants and at the service of the common people. But they have gotten into the skins the Britishers left behind and never treated their jobs as a service to the nation.

Having said that, we have no right to blame the government being in a democracy. We have elected this government by our own votes, and we have the power to overthrow it the next time. We give excuses to ourselves by saying that all parties are the same and nothing can be done. By thinking so, and suffering silently at the hands of the government, we are not acting as responsible citizens either. Only responsible citizens have the right to have a responsible government, and I think we have ourselves to blame for our condition. If we don’t give bribes no matter what the cost, our officials can’t be corrupt. If we don’t sit silently over the injustice happening around us, it would never give confidence to the wrong doers to continue their act. What I am trying to say that we are equally responsible for our condition, and its not only because of the government or the babus or the system. 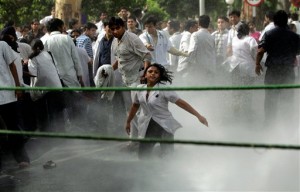 A symbolic image of the 2006 protests

A protest against this has to start with ourselves. We need to act like model citizens as the first step of our demand of an accountable government. We need to stop giving bribes to corrupt officials, we need to stop being resigned about our government and take legal actions in case of any injustice. We need to take the means which are written in the constitution and follow our fundamental duties to be rightful claimants of our rights. Now, as with every protest, we have to bear some hardships and give some sacrifices in order to gain what we want. There might be times, when the government/police try to forcefully threaten us under the guise of law and order. But we have to stood our ground, and suffer patiently without being aggressive as a sacrifice for our future generations.

We have to follow the same powerful principles which the Father of the Nation, Mahatama Gandhi advocated. We have to hate the sin, and not the sinner. We have to smile at them, treat them with respect, even when they shout at us, beat us or threaten us. We have to follow what Gandhi said, “There might be reasons for which I am willing to give my life for, but there is no reason I am willing to kill”. We have to abjure from violence at all costs, and violence means all kinds of aggression. Not just the aggression from our actions, but aggression from our heart. When our fellow Indians could make this work against the Britishers, why can’t we act with compassion with our officials, who are after all our own brothers and sisters. We have to follow his words “The weak can never forgive. Forgiveness is the attribute of the strong” as we go about being responsible citizens.