Recently I was talking to a friend of mine and during our conversation, he said something strange which made me realize something. He told me “Have some ego. Earlier you used to have a lot of ego, but now you don’t seem to have any. Get some of it back.” I laughed at this remark but it made me think later on. Is ego only bad, or does it do any good too? Should we not have it, even a little bit of it?

Ego is normally treated as something negative, something which is not good, something which we should not have. People will always be ready to explain how ego can hurt you. Ego is generally considered the opposite of humility. As humility is good, ego must be bad. In this article I will try to put some focus on why a little ego might be a good thing…

So what is this thing called the Ego? Ego literally means a person’s sense of self-esteem or self-worth. Now that doesn’t feel like something bad. Self esteem means taking pride in yourself. By this logic, a healthy ego should be a must for everybody, but then why does everybody seems to be having so much contempt for ego. I have personally believed in living life in a way which most people not. I like doing things differently, even if it means going against the norms. I feel alive by defying logic. You can say I have an ego. And yes, by that logic, I have. And I am glad for it!! 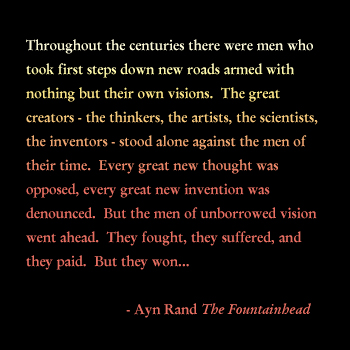 A quote from The Fountainhead

Doing anything new, like starting a business, or going against the norm, is directly proportional to how confident you are of yourselves and your abilities. Any of these activities is a proof of a presence of ego. But is there anything wrong in this? For me, it makes me work harder and smarter to compete and prove the naysayers wrong, and it feels damn good when that happens 🙂

While one can say that ego as mentioned above lead to good things, it is also to be remembered that ego is the main reason of over-confidence and arrogance. As long as you are in control of your ego, it will work for you. But as soon as your ego starts controlling you, it will hurt you. When ego controls you, it can make the truth look false and the false look true. In television debates, you can see ego controlling people as the focus shifts on their individualities rather than the topic of debate.

When you are overwhelmed by your ego, you will say words you will regret, take actions you will repent later on, and hurt the people you love most. Your inflated ego can also make people loose trust and respect for you. It might get so bad that people roll their eyes when you enter a room. And if we think, we can all recall such people in our lives. A big ego only does one thing. It makes a big FOOL out of you. And most of us won’t even be aware of it when that happens. :-/

So where is this leading? The ego is both good and bad, in different ways. As human beings, I think we all have egos. It is very much a part of our existence. But what matters is how we handle it? You can say it is a tool, which we can use to your advantage, but if it goes out of control, it will come back and hurt us. I have always believed that too much of anything is bad, and ego also falls in that generalization.

So what should we do, as human beings? How do we know how much is enough, or where to draw the line? I think that we should always stand true to our convictions, but also be willing to listen to others and consider that we might be wrong. If you find reason in someone else’s argument, it is only wise to change your viewpoint rather than taking pride in shoving your point down someone else’s throat. Ego is good when you state your point strongly, but bad when you are not even open to views and opinions from the opposite side. There is a wonderful quote by Deepak Chopra to sum it up –

“If you want to reach a state of bliss, then go beyond your ego and the internal dialogue. Make a decision to relinquish the need to control, the need to be approved, and the need to judge. Those are the three things the ego is doing all the time. It’s very important to be aware of them every time they come up.”

Changing sides again, if we look back in history, every great achievement by mankind has been achieved by people who the world have termed as egoists. How do you think the world would have responded to the man who said the earth was not flat (at one time ships used to go till a certain distance in the oceans before turning back so that they don’t fall off)? How do you think the world responded to the man who said the earth revolved around the sun rather than the other way round? There have been many such men in history who were the first to travel on the path that they did. They were the artists, scientists or the inventors. The only thing they had in common was a strong conviction in their beliefs even when the whole world ridiculed them. Where do you think this courage or strength came from? It came from their strong sense of self, and their thinking, feelings and actions can all be attributed to their ego.

When a child his born, the only weapon he has is his brain. Through the use of this brain, man has created everything we see around now. Nothing was ever gifted to us. Someone created the airplane, the car, electricity, internet, etc and these men created the future in which we are living now. In other words, the whole gist of this article is that man should be wise enough to listen to advice from others, but at the same time have a strong conviction about where he is going. It is accepted that it is good to agree with others, but all the great creators disagreed. Every man has a right to his ego, but should never let himself become an object of that same ego. I know there is a thin line between the two cases, and trying to define it might lead to a never ending debate, so I rest my case here.

Have a little EGO, but not too much 🙂