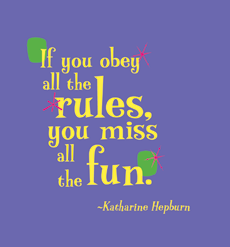 Obey the rules, Miss the fun

We come across conversations daily in our lives that are on the lines of “You can’t do it“, or “Nobody can do it“, or “This is impossible” or “Why in the hell are you doing this?“. We all live in societies and societies have rules. There are legal rules, there are religious rules, and then there are social rules. Everybody live their lives according to these rules. Over time, these rules becomes so intervined with our day to day lives that we don’t even think of doing something out of these rules. We even scrowl on anyone who talks about breaking these rules.

“What the mind of man can conceive and believe, it can achieve.” – is a popular quote by Napolean Hill. We all have infinite potential waiting to be tapped. I don’t believe there is anything one can’t do. A two year child can’t read and write, but we don’t say “This kid can’t do math or read books, and he is a failure”. We don’t say that because we know that we can teach and make that child better. Then why is it okay for such statements to be used for grown ups. Who said we can’t teach something to a young man, or for that matter, to an old man, irrespective of whether he is 50 or 70. When a 67 year old man can climb the Mount Everest and a 98, yes 98 years old man can run a marathon, who are we to say that a person can do or can not do something.

And isn’t it even worse to write off a person because of what they are instead of what they might become? People have started companies in their fifties and have passed school/college at four times the average age. Even our former President APJ Abdul Kalam learned Hindi while he was in office in his seventies. And when you have the desire, you can even make miracles happen.. Not being able to do something is simply a state of not knowing, which can be overcome irrespective of the current situation of the person. Who is anybody to judge and decide what a person can do or can’t do?

And more than judging or commenting, how does anyone but you control what you can do or can’t do? When you have to do something, it is ONLY you who can do it. When you decide to do something, it is very important that you stand by your decision. You need to be strong enough to discard the naysayers and prepare for the task ahead. It might not be easy, and not many people might have tried it before, but so what?? Anyways, what is the fun in doing something easy? If you think you are capable of doing it, then you are. Period. Go ahead and show the world what are you capable of. You are here living your life, not somebody else’s, so why take your decisions based on somebody else’s feedback. It can be summed up by this quote –
“Don’t base your decisions on the advice of people who don’t have to deal with the results”

Imagine how your life and those you impact would improve if you were to let no one else decide how you would act, but instead base your decisions on what you believe. The worst case scenario will be that you will not succeed in what you are trying to do. But that is not a failure, that will be a lesson on how to do it better next time. No task is a failure just because you did not get the expected result. It is not a failure if you are learning something. But if you don’t do it, you will always curse yourself for that one thing which you believed you could do but did not attempt only because of what others said or thought!