Have you ever ‘tried‘ to do something? Think about it for a moment, how can one actually ‘try‘ to do anything? Because if you succeed in your intention, you would have done it, and if you failed, you would not have done it. But where did the ‘try‘ go?

Having established that there is no such thing as trying, why is this word so common in our day to day lives? Why is it that this word is often associated with the ‘doing’ of things? I would guess that ‘try’ or ‘trying something’ is another of the commonly used phrases we use in our daily lives without even being conscious about it. It is just like the ‘Thank God it’s Monday‘ example I illustrated earlier. Using the word ‘try’ is just an escape route our sub-conscious mind takes and helps us justify our actions (or lack of them) later on. 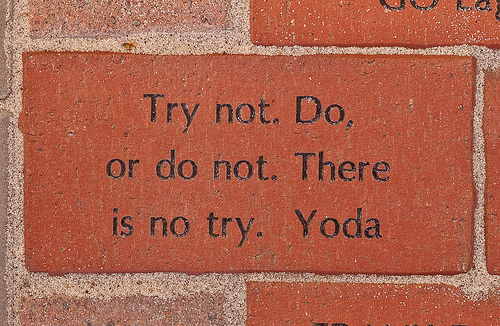 Reasons and Justifications
Remember any instance where couldn’t do something you ‘tried’ to do. After the failed attempt, we often find ourselves using the word ‘try‘ to justify the same to others and to ourselves too. We never ‘tried’ to do anything, as it is something which can’t be done. But we have our reasons and justifications to defend ourselves with. Lets be honest and accept that we are only fooling ourselves and nobody else by falling into the trap of trying and following it up by reasons. I am not saying there is something wrong if you don’t accomplish a task, but to take responsibility and not hide behind the ‘try’.

Just Do It
Nike has got the perfect message in their tagline – Just Do It! We should let go of all the trying we do and get into the world of doing. The difference in the ‘doing‘ world is that the focus is on being in action. In the ‘trying’ world, there is a lot of thinking and analysis involved, but in the doing world, there is either success or failure in the ‘doing’. There is no successful ‘trying’, only successful ‘doing’. And as we are stopped by different obstacles (which will naturally come), being in the ‘doing’ world will not give us any reasons and justifications to fall back on and instead we will spend our energy on how to actually ‘do’ the task. There is always growth in the doing world.

What to do in the face of obstacles?
If we are doing something worthwhile, there will obviously be some hurdles on the way. Instead of focusing on the hurdles, we should strive to just learn our lessons and doing the same thing with a different approach. Now it is very easy to fall into the trap of such words again. So don’t ‘try’ to overcome the obstacles, just overcome them 🙂