If there are sports as fast as hockey and football which can get pretty exhaustive and a real test of stamina for players as they hardly get any break in a game, there sits Test Cricket on the other side where your stamina and skills are tested, but in a totally different way. Test Cricket is the longest form of cricket, where two teams play over five days, and sometimes even those five days fails to produce a result. Nevertheless, it has its own following and has been in existence since 1877. It puts the players’ skills, patience, fitness and stamina to utmost test over the five days. 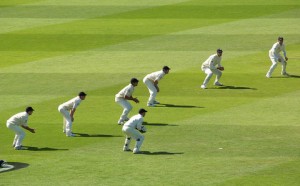 A sight only possible in Test Cricket

A test match can turn a match over its head many times over the period of 5 days. Every session gives both teams the chance to show their talent and come back into the game. This way it is a real test of skills and only the best team will win at the end. Lucky performances don’t matter as much as in ODI and T20 cricket. There is ample proof of this as teams have won after having to follow on or being completely outplayed in the first innings. No other sport perhaps can give such thrills.

Test cricket, more than anything else, is the test of patience of the players. Ishant Sharma’s spell to Ponting in Perth in 2008 was a testimony for that. A bowler has to bowl long spells and really bring out his talents to the table to get the batsman out. There is no hurry or run rate issues and the batsman will not play any rash shots. The batsman will also wait for the bowlers to get tired out and the ball to get old before playing their shots. In this way, it is more about playing time and testing the patience of the opposition which makes Test Cricket so intriguing to watch.

Although it might seem like a slow game, it never goes down in intensity. The concentration and focus which players need to put in, and the fighting spirit which brings out the best in many players, is a real treat to watch. Players like Rahul Dravid, Steve Waugh, VVS Laxman, Anil Kumble are a result of this unwavering focus and never ending determination on the cricket field. 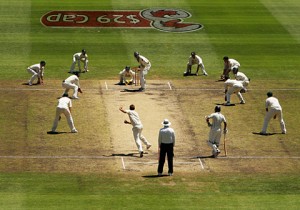 Playing continuously for five days, sometimes under very harsh weather (like in Chennai) requires great level of fitness and character to survive, let alone play. Many of the players to score a century in Chennai have suffered cramps and dehydration, but it has also brought out some of the best innings and test matches ever played. When a bowler has to bowl 40 overs a day and a batsman might need to bat out more than 10 hours, every muscle in your body will be tested and is a big challenge for not only the players, but also the support staff.

Those who say Test Cricket is dead perhaps have never realized what cricket is. The contest between bat and ball, the constant struggle to wait before the other side makes a mistake, and the never ending twists and turns it brings, with the emotions it brings out from players as well as spectators, make it the ideal ‘Test’ of a player’s skills, and also their patience. Only test cricket can create great records such as Australia’s 16 consecutive test wins, and only test cricket can bring out matches like the Calcutta Test in 2001, or the Adelaide Test of 2003, or Headingley in 2002. Only test cricket can bring out heroes like Gavaskar, Dravid, Laxman, and Kumble. And cricket would certainly be poorer without the presence of players of this stature.