After the last article where I chronicled three important cricketing moments from my archives which I could recall very vividly, I went over the archives once again. And alas, I found two more historic moments from 1999. See the first three here. I am sure I can find many more if I try to go over the images again and try to recall the matches. While going over these archives, I also got present to the fact that I remember the 1996, 1999 and 2003 World Cups much more clearly than the 2011 World Cup which we won. Well, those were the days!!

The 1999 India Pakistan test series was as dramatic as it can get. It was the first tour by the Pakistan team to India (apart from 1996 WC) in more than a decade and Indo-Pak relations were on a boil at that time. Even before the first ball was bowled, some Shiv Sainiks damanged the Kotla pitch which made the first match to be scheduled in Madras instead. India lost that match by some 12 runs after Sachin’s dismissal following a brilliant century. His dismissal by an unnecessary shot caused an unlikely collapse resulting in India losing the match.

The second test match was eventually held in Delhi and it was forever written in history books for what happened in the 4th innings. Pakistani batsmen fell prey to the guile and spin of Anil Kumble on a chilly February day. He became only the second player after Jim Laker to take all 10 wickets in an innings. The fact that I watched every ball of this last innings on TV made the memories even more sweeter. 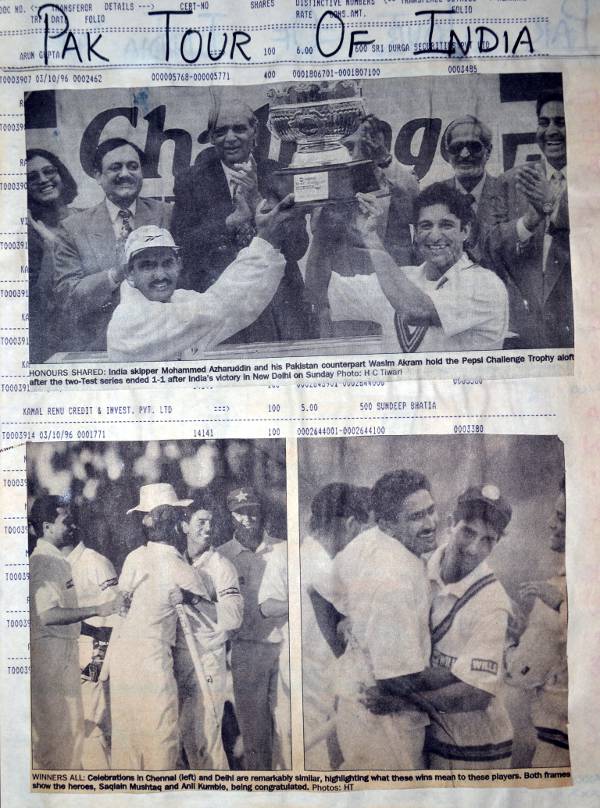 An eventful series - as dramatic as it gets

Though the series was shared 1-1 and as you can see in the pic, both Wasim Akram and Mohammad Azharuddin lifted the trophy, there was another controversial Test Match after the series in Calcutta as part of the Asian Championship. It was marred by a controversial run out of Sachin Tendulkar which led to crowd trouble and I still remember Sachin and Azhar going around the stadium asking the people to calm down. Eventually the match was finished in front of empty stands as the crowds were evicted by the police. India lost the match. Shoaib Akhtar, who was at perhaps the peak of his form at this time, was at the centre of the controversy in this match. He bowled some unplayable deliveries to the Indian batsmen but his involvement in the Sachin run out turned into a big controversy. As I said, as dramatic as it gets.

Read this Cricinfo report to get a feel of what happened that day. 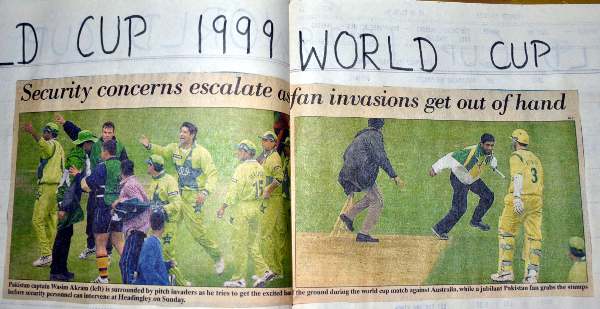 Pitch Invasions during the 1999 World Cup

The 1999 World Cup in England saw fantastic performances by Lance Klusener, Steve Waugh, Shane Warne, Rahul Dravid and many more players, but it was also one tournament where crowd trouble threatened to go out of hands, for the first time outside the subcontinent. The tournament saw a lot of Asian fans watching the games and they would celebrate by running onto the field after the end of play. This turned into a nightmare for the security staff as they were unable to handle the crowd. Luckily no untoward incident happened, but it would not have been a surprise if something tragic would have happened. The below pic taken after a Pakistan match shows it all.