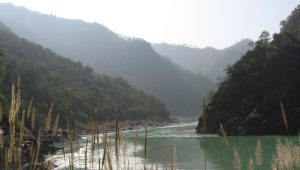 I went to a camping trip with a few of my friends. I asked one of my Keralite friend about his native city, he told me about a place in Kerala I had no idea about. Then some time later he asked me whether I had been to any camping trips before. I told him I had been to Rishikesh, and he talked about the Shivling made from ice. He was mistaking Rishikesh for Amarnath. This incident illustrates clearly how vast is this country and how much do we really know about places and people of our own country.

In the north, we have the mighty Himalayas. We have tourist places such as Ladakh, the Kashmir Valley, Shimla, Manali, Dharamsala and so on. We have pilgrimage centres like Vaishno Devi and Amarnath Shrine. Millions of devotees throng to these places every year. Kashmir’s beauty is so amazing it is called the heaven on earth. In the Kumaon and Garhwal ranges of Uttaranchal, we have holy places like Gangotri, Yamnotri, Kedarnath and Badrinath. In the east, we have the fully mountainous state of Sikkim and Buddhist monasteries there are a major attraction. Further east, we have the pristine beauty of Arunachal Pradesh with its lush green forests and deep river valleys.

In the plains, we have the fertile lands of Punjab, Haryana and Uttar Pradesh. Punjab is the land of 5 rivers while Ganga and Yamuna flows through the rest of the plains. In Punjab, you have the Golden Temple in the city of Amritsar. We have the historic capital city of Delhi in the plains with its famous Qutub Minar and Red Fort. In Uttar Pradesh, we have the royal city of Lucknow and the Taj Mahal in Agra is a destination many Westerners associate India with.

In the west, we have the majestic state of Rajasthan, with its forts and palaces. Its rich heritage, colorful culture, deserts, forests and varied wildlife make it a state non-parallel. There are tourist destinations like Jodhpur, Jaipur, Ajmer, Jaisalmer, Udaipir and Mount Abu with the Aravallis, India’s oldest mountain range as the backdrop. South of Rajasthan, we have the historic state of Gujarat. Art, history, music, culture, all combine with each other to form a wondrous matrix that is the cultural exuberance of the people of Gujarat. The states of Madhya Pradesh, Bihar, Jharkhand, Chattisgarh have seen many a battles between warring armies.

In the east, West Bengal stands tall with its culture, heritage and history. With the Bengali city of Kolkata as its capital, West Bengal is an experience in itself. In the north east, states like Assam, Meghalaya, Mizoram, Manipur, Nagaland, Tripura are there with a large number of tribal groups each having its own distinct culture. The dense forests lying in foothills of Himalayan hills are stunning in their natural beauty, and are home to many of wildlife parks including Manas National Park and Kaziranga National Park, which are natural World Heritage Sites. Besides, lovely waterfalls and caves are another beautiful attraction of the North-East.

Go south and you have Maharashtra, Karnataka, Andhra Pradesh, Tamil Nadu and Kerala. All these states have their different language, culture, food and have everything for tourists ranging from backwaters to beaches to pilgrim centres to hills…. The beaches of Goa or Kerala are there, you have pilgrim centers like Tirupati and Madurai, you have hill stations like Munnar and Ooty, you have the backwaters of Kerala. Within these states, there are 5 languages spoken and the food in all the places have its own characteristic features. India’s highest waterfalls are in Karnataka and we have the most richest and most visited place of worship in the world at Tirupati in Andhra Pradesh.﻿

I would consider my life to be well-lived if I travel the length and breadth of this country in my lifetime..