This was to be my longest ride till date. The best I did before was a 768 km ride in 48 hours, and this one was meant to be 1300 km spanning over 4 days. We were going to pass through national highways, forests, ghats and were also going to do some off roading along the way. I was sick of doing many single day and two day rides and wanted to do a longer ride, so this was my chance and I lapped it up.

We left Bangalore on Friday at 8 AM expecting it would be a long day considering we planned to cover more than 500 km and reach Dandeli by nightfall. We started well but were soon delayed by nagging problems with one of the bikes. Though this meant we lost a lot of time, it also ensured proper rest for all of us. We managed to reach Hubli, which is around 430 km from Bangalore only after sunset and it has also started raining by that time. We headed towards Dandeli which was another 100km of riding through not so good roads but were again stopped in the ranks by a flat tire. After another hour long break, we finally managed to reach Dandeli just after midnight, which meant 16 hours of riding. Phew… Off we went to sleep after an hour of chatting.. 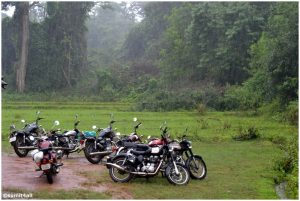 All the bikes at Dandeli amidst the rain

Sleeping off late obviously has to carry forward to the next day. On day 2 we were supposed to ride to Karwar, which was a port town in west Karnataka and come back by evening. But we were able to start only by 11 am and were stopped by another bike problem for an hour in between. There was some 15 kms of off road biking involved and that was a good experience similar to my off roading experience in Kemmanagundi an year earlier. But all this took time and it was raining too so we managed to reached Karwar only by 4 pm. Considering we were late and there was a beach to relax in Karwar, we decided to stay overnight and leave for Dandeli the next day. 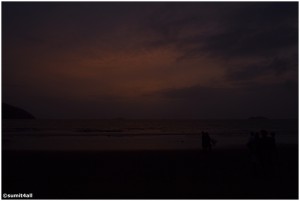 The evening sky at Karwar

We chilled off in the beach at Karwar for around 3 hours in the evening. Karwar is only a small town 90 km south of Goa and hence the beach was quiter, and cleaner than the beaches in any other major city. It was a refreshing and relaxing atmosphere as we just sat and enjoyed the cool breeze that was blowing. We wrapped up after the sunset in this quite town, and headed for dinner and other ‘refreshments‘… 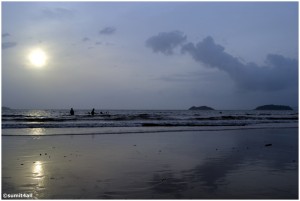 A picturesque scene at the Karwar Beach 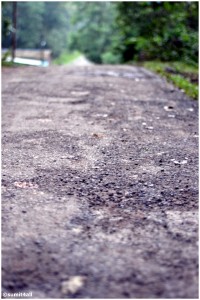 The tar.. it feels best when it touches the rubber

Day 3 was supposed to be a chill out and easy day before another long and tiring 500 km ride coming up on day 4. We chilled out again at the beach in the morning at Karwar and left for Dandeli at noon. This time there were no bike problems and we reached our resort at Dandeli by 3pm. The route was as scenic as it gets. Again there was some off-roading which was a memorable experience. Casual talks followed in the evening and some much needed rest and preparation for the next day marked the rest of the night.

Next morning we headed back for Bangalore from Dandeli at 9am. It was supposed to be another long ride of more than 500 km and we expected to do this in 10-12 hours. The road along NH4 was as excellent as it gets and many of us were doing speeds of more than 100km/hr. As it was the fourth day of riding, there were some tiredness and we took constant water and tea breaks in between. A dog decided to commit suicide in front of one of the bikes causing some damage which resulted in a extended two hour lunch break. 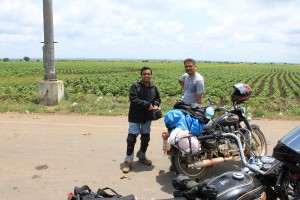 Myself during a break along the way

After getting the bike fixed, we resumed our journey back and we did two continuous stretches of over 100km in 90 minutes or so. That really helped in covering the distance and we reached within 100 kms of Bangalore by sunset. We last assembled at Tumkur around 7:30 pm and after some tea and refreshments, we started our different ways leading to home. The highways were wonderful all along the way and due to it being 15 Aug, we didn’t see as much traffic in the city as we were expecting. I managed to reach home by 10 am.

After doing 1300km in 4 days on a bike, my whole body was aching like anything. But that was the fun of the ride and a reminder of all the fun we had during the ride. All the high speed riding, through highways and ghats, riding in the rain and the bone jerking off roading was an experience to cherish. 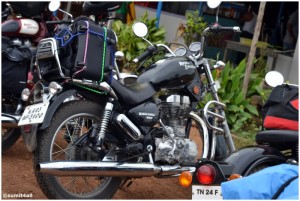 My Thunderbird.. A wonderful companion for a long ride

P.S. – To see all pics of this trip, click here