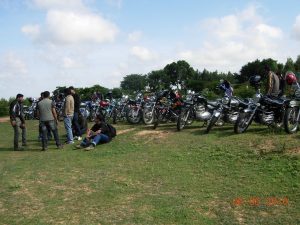 I woke up at 5:15 am. Shit! We had planned to meet at 5:30 am at Hebbal before riding to Nandi Hills. Spending a good saturday evening with friends might have made me press the snooze button a few times more than I normally do. I gave myself 10 seconds to decide between the bed and the bike. Me writing this post means the bike won, and I was off at 5:30 am from home, reached Hebbal at 5:45 and thankfully, they were still there. Twenty two Royal Enfields!! Wow!!
We started our engines, and started cruising towards Nandi Hills. I looked down, and saw the tarmac beneath as we left the city. Cool wind was blowing against my face and I was “in the” scene. This is the feeling you can only get on a motorcycle, and I felt glad to be on one of the best motorcycles available in our country. Every sight turned towards us as 22 thumping bullets made their way uphill. 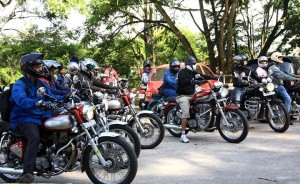 Atop the hills, it was a little cold. After breakfast and some chit-chat, we decided to head back. You can’t keep a rider away from his machine for long! Stopped mid way to take some pics, and more chit chat. Some talked about their newly acquired riding gear, some about the classic 500, and few people made final plans for their ride to Leh next month. I am planning to do this myself next year! The ultimate ride any rider can dream of. We finally made back around 11:00 am. The city was just waking up, unaware of the fact that I have just had the best start to my Sunday. A 150 km ride!! Nothing beats that!! 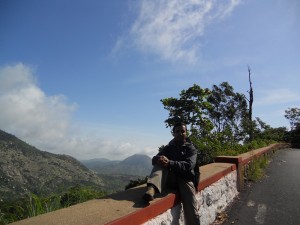 Give me some sunshine 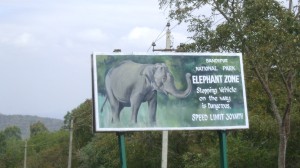 Murphy’s Law proved itself to me on two consecutive weekends. First, the plan to ride to Pondicherry with some friends on the Christmas 2009 weekend was cancelled at the last moment. Then, a ride to Lepakshi on 3 Jan with the Royal Indians club started off badly with the clutch cable giving up as soon as I started. So the ride to Bandipur on 9th-10th Jan was awaited with much enthusiasm.

We were 4 of us on two bikes, my Thunderbird TwinSpark and one Yamaha. Bandipur is a widlife sanctuary about 220 km from Bangalore. Just after you cross Bandipur, you get into Mudumalai Tiger Reserve which falls in Tamil Nadu. We got two tents for the one night stay near Gudalur, around 15km after Mudumulai Reserve on the way to Ooty.

We planned to start at 6am on 9th January, and finally started at 6:30am. We took the Mysore Road out of Bangalore and after the initial city traffic, we were cruising at around 80km/hr. We took a break at 8:10 am for tea after around 60km. We left again at 8:25am towards Mysore. The highway towards Mysore (state highway 17) was excellent and we reached Mysore at 10:10 am. The trip meter read 160km. We stopped for breakfast for 30 mins in Mysore.

After Mysore, Bandipur was another 85km and our camp was another 25km from there. We took the road to Ooty out of Mysore. After crossing Nanjangud and Gundulpet, we took a halt for 15 min just before Bandipur at 11:45am. The road after Mysore was not as smooth as the Bangalore-Mysore road, but was still pretty good. Near Bandipur, the road was patchy at places and road construction work was going on at some stretches. We started once again at 12 noon and reached the camp at 1:15 pm. It was 270kms done.

After doing our lunch, we booked a night safari into Mudumalai in the evening, chilled out in the camp, went by riverside nearby and took some rest. In the evening, we got some drinks / snacks for the night. Our jeep for the night safari was ready at 7pm. Soon we were into Mudumalai Tiger Reserve. Very soon, a tusker was waiting for us at the road side. Our jeep driver ensured we got a good look at the elephant. He turned the jeep towards it with the headlights pointed at its eyes. Basically, he scared the poor animal away. So much for the poor animal. We continued ahead but it looked like other animals were too scared to wander near the roads. We returned after a disappointing 1 hour night safari at the camp. Had our dinner and drinks and retired for the day.

Woke up at 6 next morning, got ready and left for Mudumalai on our bikes for a van safari. The Van safari took us on a beaten path and we managed to see deer, elephants and peacocks on the way. We came back to the camp after that. After breakfast, it was time for checkout at 10:00am. We decided to go uphill to Gudalur town to get some Chambala Tea which had a factory nearby. Thereafter we left back for Bangalore through Mudumalai and Bandipur.

Going through the jungle on our way back, we weren’t expecting much. But as soon as we entered Mudumalai, we saw a massive Bison by the roadside. Some cars were already stopped there taking snaps. We took the snaps and continued on our journey. Soon we entered Karnataka and were into Bandipur. We were for a surprise. As I rode through Bandipur, I saw two elephants, a mother and baby elephant duo, by the roadside. I slowed down the bike in the hope of catching a few snaps. But, to my utter surprise, as soon as I slowed down the bike, the mother elephant started chasing our bike. I never an elephant could run so fast. As it chased us, dust / mud flew up as a heavy truck has passed through there. I was startled and accelerated. But in the process of slowing down, I had taken the bike off the road into the gravel sideby. I could see the elephant getting nearer in the rear view mirror. Soon the bike was on the road again, we zoomed off the tusker faded in the rear view mirror. There were moments of panic when my bike slid into the gravel and luckily we didn’t skidded off. In the end, my bull was chased by an elephant but it was a good enough experience.

Continuing from there, we took a break at Mysore for lunch and two more breaks after that to ease our asses which were now beginning to ache. We continued travelling after that and reached our homes back at 5:30 pm. The trip meter read 580km over 2 days. In all, it was a good ride, riding a bike through the jungle was fun and getting chased by an elephant was the icing on the cake. After reaching home, we put our tired asses to rest. Rest till the next ride comes calling!!﻿