Recently when I was in Delhi and roaming about with a few friends in Connaught Place, an old lady beggar approached us for money. This is a common sight across our country in prominent tourist places. Not only is begging illegal and you could be fined a Rs 1000 for giving Re 1 to a beggar,  I still remember the old Doordarshan clip asking not to encourage begging. However, it is very difficult not to give them a little money considering their condition. So this friend of mine took out a Rs 10 note and gave it to the old woman. What was wonderful to see after that was the joy of giving on my friend’s face. Her face lit up as she handed over the 10 rupee note so that it can make a difference in the old woman’s life. The woman blessed my friend with her aashirwaad and both parties went their way, feeling good about it.

What comes to your mind when you think of ‘aid‘? Wikipedia defines aid as a voluntary transfer of resources from one party to another, with the objective of benefiting the recipient party. The parties could be individuals, companies, or governments. It could range from giving money/food to a roadside beggar, the millions of dollars western governments provide to poor countries, or the subsidies our government provides to the poor for buying essential items like rice and wheat. The primary objective of any kind of aid is helping the recipient improve their living conditions and standard of life. There may be other diplomatic or political reasons as well but altruism remain the major motivator. 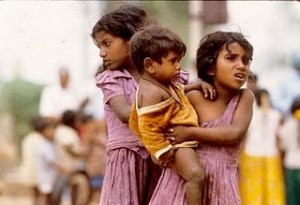 A common sight on streets of India

Now the point I want to propose is that aid actually does more harm than good to the recipient in its general form. Aid only helps in the short term, and leaves the recipient in need of more aid in the long term. This is basically a criticism from an economic point of view. Today many economists are arguing that aid actually harms the recipient party and discourage the development of the recipient. I also want to make clear that I am not against the idea of giving aid or providing help to the needy. I have always felt awe at individuals (like my friend in the above incident) or organisations who give their resources for the benefit of the less privileged. What I am arguing here is the mode of this altruism? I mention that because I think it is important to differentiate between the two.

Aid, in its most basic form, provides for basic human needs such as food and shelter. For example, you give money to a roadside beggar so that he/she can buy food and clothing which they are otherwise unable to afford due to lack of employment or any other source of income. The government might subsidize rice and wheat to benefit the poor who have very meagre income and are unable to afford them. Again, very noble objectives! But it is important to realize that the lack of money or certain resources is not the main problem, it is only the symptom of a much bigger problem. The bigger problem is of lack of opportunities or services to avail to improve a person’s standard of living. It ranges from the lack of access to education, training and employment to the lack of social justice and equality in the world.

When we give money and resources, we are focussing on the symptoms and not the underlying problem. It tends to make the recipient dependable on the aid and discourage any development effort to teach them new skills and enable them to seek food and money on their own merit, rather than charity. This can be illustrated by the continous sight of beggars who spend their daily collection and then are back in the same position hoping for more aid. This is also evident in people’s demand in many Indian states to remain below the poverty line because the prices of rice and wheat will increase if they cross over the BPL line. Many NGOs and social workers have also find out that ignorant villagers are discouraged from participating in development efforts by them if aid is made available by the government. Now that is an anticlimax. The same effect is seen not only in individuals but also on governments. Poor nations stand the risk of loosing foreign aid if they develop their economies on their own. Aid also encourages corruption and red-tapism in official matters making it more difficult for any development effort to actually happen.

I am not denying the fact that immediate aid can help save a family from starvation and death, neither the fact that both donor and recipient are happy when aid is actually exchanged. And it does help in the short term. But in the long term, it only ends up crippling the recipient and it also degrades the status of the recipient in the society. The donors don’t see them as capable of earning their own livelihood and the recipient loose their self-confidence and consider themselves lesser human beings at the mercy of the donors. This inequality is the root cause of many major problems prevalent in society today. Looking at another human being as more or less than ourselves is the cause of all evils, rituals and crimes that plague the society today.

What many, and I too, advocate is spending more money and resources in the building of long term institutions and organizations which can self-sustain without the need of aid in the long term and generate value for people and the society. This might mean spending money on building an institution rather than giving it to people for food who are obviously in need of it. This can never be an easy decision and even seem cruel, and I have always believed that tough decisions and bold leadership is required to create long term benefits and value which can sustain itself and empower the people to be independent of outside aid over a period of time.

An exemplary example of this could be the setting up of prominent educational institutions like IITs, IIMs and AIIMS right after the independence of India by the Jawaharlal Nehru government. After Independence, there were more pressing needs (of hunger, disease) the country was facing but Nehru had the vision that long term development needed exemplary scientists, engineers and doctors. And looking back in hindsight, it is these institutions which have produced people who have contributed in their respective fields, not just in India but also internationally. Another example is the opening up of the economy in 1991, which certainly was not an easy decision at that time. It opened up our markets to foreign competition by companies who were much ahead in technology and resources. It might have caused some hardships in the short term, but it also forced our entrepreneurs to compete with the best in the world by providing the best services to customers in India as well as abroad. Companies like Infosys and Bharti are examples of long term and sustainable value being created for Indian youth while providing world-class services to customers.

Based on the above explanation, what is required now from the Indian government and individuals is not just aid, but real effort to take bold decisions and contribute in a way that creates value even after the aid amount is over and even after the donor is gone. We are already compassionate towards the needy and their needs. This is clearly evident in the joy we get when we donate resources or give money to beggars or people in need. Going ahead, we need to look for the long term benefits and invest (not donate) our money in creating value in a way that empowers the people to take care of themselves and their families. This will give them a sense of belonging and equality with us who are more privileged to have the resources and opportunities that we have today. It will also be the more responsible and rightful thing to do for us in providing means of social and economic equality to our fellow brothers and sisters so that we can stand as equal citizens as India marches ahead in the 21st century.