Over the last month, amid all the controversies and media debates around the Jan Lokpal Bill, I feel we have somehow lost the essence of the movement. There have all kind of remarks in the media, from comparing Jantar Mantar to Tahrir Square, whether Jan Lokpal Bill will give a lot of powers to Lokpal, or the smear campaign against the civil society members of the Lokpal Bill drafting committee. Somehow, nobody is focussing on corruption and the urgency to tackle it but everybody seems to be interested in small trivial issues raised by some egoistic individuals. Below I am listing four very important points about this movement from my observations and point of view –

1. Jantar Mantar is not India’s Tahrir Square
Anna Hazare’s fast and the kind of support it gathered from the general populace have made many people, including the media, compare it to the protests in the middle east countries. There were calls of equating Jantar Mantar with Tahrir Square. While I agree that people are frustrated with the current state of affairs in matters of corruption in this country, it will be unwise to compare both. An Egypt type of agitation is needed when there is no liberty for the people. We have, within our rights as a democracy, the right to peaceful protest under the mandate of the constitution itself. 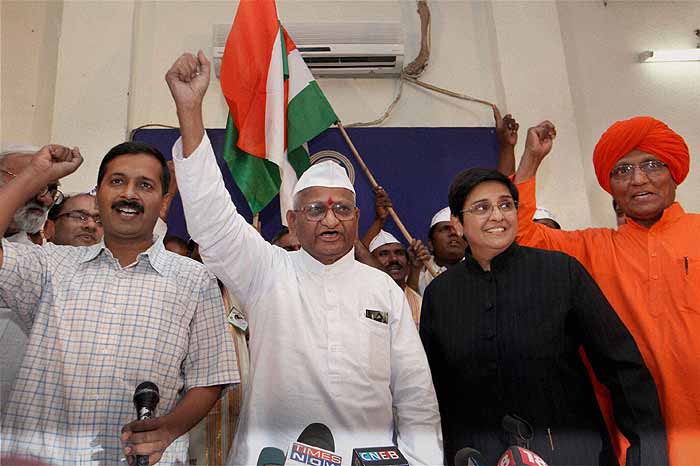 Anna Hazare has asked all of us - "Do you have a conscience?"

2. We have shown the world the way in peaceful protests, and they are still revelant
Our father of the nation Mahatma Gandhi has shown the whole world the way to peaceful protests in a non-violent way and how powerful it can be. Our politics provides us a wonderful platform to raise our voices and bring out change without dropping a single drop of blood. Leaders like Martin Luther King Jr, Aung Suu Kyi, Nelson Mandela has shown the world that Gandhian methods are still relevant.

3. Anna Hazare and Government are on the same side
Anna Hazare has also used Gandhian methods, but his fight is not to overthrow a government, but to partner with them in creation of a stronger law. It is very important to see corruption as the villain here and not the government or the ruling party. Civil Society and the Government have to see themselves on the same side of the table to be able to find an effective solution to the problem of corruption. No doubt some members of government are corrupt, and hence the role of civil society to pressurize them to do their job as they are expected to do so.

4. Hazare has just asked one question
Anna Hazare has created a lot of problems for the government by bringing a lot of questions to the national forum. But the most important question he has asked is for YOU, fellow Indians. He has asked “Do you have a conscience?” The success of his agitation does not depend on how many corrupt politicians come by his side and renounce corruption, he is waiting to see how many people has he inspired to come support him in this cause and other causes which are important to the nation. He is asking you whether you feel for your country, whether you care for a better future for your kids? If the answer is yes, then get up, and join him in this fight and save the nation from the clutches of corruption and other problems we are facing today.