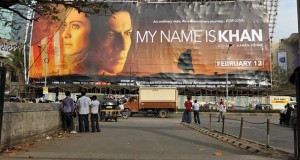 A MNIK poster on the roads

This is an open letter to the so called protector of Marathi rights, the Shiv Sena. For those who don’t know, Shiv Sena is a major political party in Maharashtra headed by Bal Thackeray, and fights elections normally in an alliance with the BJP. The letter starts below –

First of all, congratulations of being a responsible political party in Maharashtra who thinks that blocking the release of a Shah Rukh Khan movie is more important than working on other civic management issues in Maharashtra and Mumbai. These other “less” important issues like lack of safe drinking water which results in diseases like diarrhea, cholera which in turn leads to high infant mortality rates.

Mumbai, where most of you Shiv Sainiks work, is a city of 14 million people but over 60% of them live in slums. And the slum population is still increasing every year. There are traffic problems, lack of housing, poor water and power distribution system, and yet you attack Shah Rukh, Mukesh Ambani and Sachin Tendulkar for saying the obvious. And remember, every time you protest / attack, you are wasting money paid as tax by your own Mumbaikars!!

Only if you remember these are the same people who have brought pride to Mumbai and to India for the last many decades and continue to do so. You ask Shah Rukh Khan to go to Pakistan for supporting Pakistan players, yet your supremo Bal Thackeray invites Javed Miandad at his house. You blame Sachin Tendulkar for saying he plays for India and he is an Indian first, but have forgotten the fame Sachin has brought to Mumbai, India and Indian Cricket. You attack Mukesh Ambani for saying Mumbai is for all Indians, when most of Ambani’s (and Mumbai’s) business comes from all over India.

When India’s constitution guarantees the right to freedom of speech and expression to every Indian, who are you to consider yourself above it? You lost in the last assembly elections, and I hope you don’t think tactics like this would make you win the next one. And if you have to protest, what happened to the idea of peaceful protests? Where did you get the idea that disrupting public life, resorting to violence and attacking prominent personalities will do you any good.

Or maybe you are just in a race with MNS to grab the “most headlines in newspapers” award. Because you feel your own Mumbaikars don’t know what film to go watch, and what all you do is more important than the farmer suicides which are happening in rural Maharashtra unabated. Or maybe it is just frustration at continuously losing elections in Maharashtra that you choose to participate in a headline grabbing race with MNS.

Instead of doing all this stupid stuff, when will you wake up to what Mumbai actually needs. What about protesting for wider roads, an efficient rail system, and sufficient power and water supply? Why don’t you spend time with the youth of Mumbai training them, educating them, and make them more competitive to stand national and global competition? Why not be responsible for a change and go out and meet farmers in rural areas and understand their problems and search for solutions?

I think it is time for you to ponder over what you have been doing and what your city and state needs. Participate in active discussions in the assembly instead of disrupting assembly sessions or remaining absent. Being a responsible opposition party only can help you win the elections next time, and it’s high time you realized that!!