Independence Day comes every year on the 15th of August, and this was the 26th time I witnessed it. Over the last few years, it has been awaited more for the holiday it brings than for the occasion. During the school days, there would be flag hoisting ceremonies and some functions highlighting the patriotic sentiments. Back home, there would be patriotic songs and movies playing on television. In the last year 5 years, it was only just another holiday. But this year was different! One of the best Independence Days I have had for a long long time. 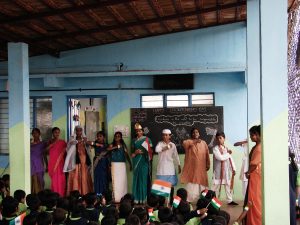 I have been volunteering as part of YEFI (Yahoo Employee Foundation Initiative) to teach English to school kids in a school which is partially funded and supported by Yahoo. More than the teaching itself, it is the interaction with the kids, most of whom belong to poor families, which has been a wonderful experience so far. Most of the kids speak only Kannada, Tamil or Telugu and neither Hindi nor English, so I thought communicating with them would be a big problem. But let me tell you, you don’t need a language to interact with kids. Kids are always natural and self expressed, and they often remind us of the fact that we were once like them!! And interacting / having fun with them on Saturdays for two hours really takes care of all the tension / stress one has in life. 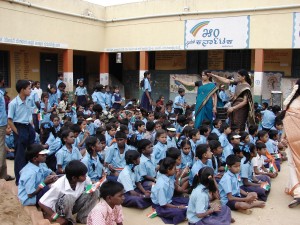 Getting Ready for the Occasion

This Independence Day fell on a Sunday, and we decided to visit the school for the customary Independence Day prayers and some events to mark the day. We first went to a Parikrama school, which is funded totally by Yahoo. When we reached the school the program had already started. There was a dance highlighting the different religions in India and the “Unity in Diversity” theme. Then there were few patriotic poems in Kannada but I still managed to get the crux of it 😉 Then the teacher called all of us to the front and we had some interaction with the students. Then we were given “Happy Independence Day” greeting cards made by the students themselves. This was their special way of welcoming us and treating us on the special occasion. My card read “Happy Independence Day, Sumit Anna” (Anna is brother in Kannada) 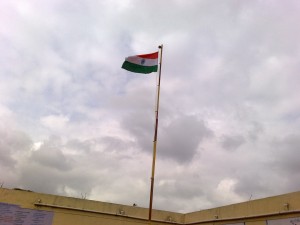 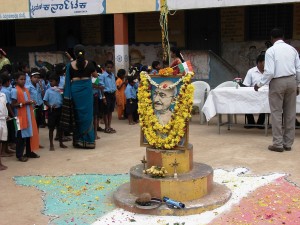 The Father of the Nation

After this, we left for the government school where I had been volunteering. They were preparing for the flag hoisting ceremony when we reached there. They had marked the ground with the Indian Map, and placed the flag pole in the middle of it. On the side there was a portrait of Mahatama Gandhi. Soon the teachers started an Aarti for the Father of the Nation. It was a wonderful feeling witnessing this. After the Aarti, the flag was hoisted by the Headmaster which was followed by “Jana Gana Mana”. After this, we were given roses by the school authorities to mark the day. As I knew quite a few kids of the classes I have taught in my previous visits, we interacted with the kids for some time before leaving. 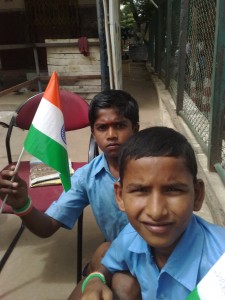 Kids and Innocence on their faces

Kids are free of the biases, prejudices and political agendas that cloud our point of view, they see things as they are and fully express themselves without the fear of feedback, which is an ability we lose somewhere as we grow up. They know the real meaning of love, be it for fellow human beings or for the country. They are innocent and open to life fully. There is more for adults to learn from children than the other way round. Whether they are playing marbles in the sand, or just riding their tricycle, or playing with toys, they put every bit of their energy into it. Watching them, and interacting with them is something I have always cherished. I would recommend nobody should lose touch with children. Take a moment to ask yourself when was the last time you played around with children, and if the answer is more than a month, I will suggest you find a way to indulge yourself with kids, be it with the son of a friend, or a neighbor, or anybody else.

After I was back home, I realized what a wonderful time I had. With time, we have started to treat our festivals only as holidays and forgotten the festivities associated with them. But this year, I actually saw people celebrating our Independence Day with pride and honor. The way it was supposed to be, the way it should be – the most important festival of our free country. Let us keep the spirit of this country alive. Jai Hind!! 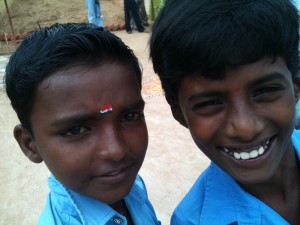