I yesterday (27 Dec 2010) watched the live webcast of IIMA Conclave, an interaction between Narendra Modi and IIM A alumni at Ahmedabad. It is no secret that Gujarat has made tremendous progress under Narendra Modi in the last 10 years. It could be highlighted by a remark by Mr Ratan Tata – “You must be stupid if you are not (doing business) here (in Gujatat)”. The speech today from Narendra Modi was as always, very inspiring and full of facts, rather than promises. After the speech, there was a Q & A session with the audience and there was one specific question and its response which I am going to share in this post.

The question was about school drop out rates in Gujarat. Interestingly, Narendra Modi answered this question by sharing the progress Gujarat has made in this regard. He said that when he took over the Gujarat governance for the first time in the year 2000, the drop out rate was 20% (from Std 1 to 5). After interviewing girl students, their parents and school staff, it was found out that the schools didn’t have separate toilets for boys and girls at that time. And sometime from Std 1 to 5, the girls started getting conscious about using the same toilets as boys, and they started to drop out of school instead. 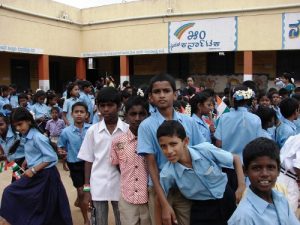 School Children in a government school in Bangalore

What Mr Modi pointed out after that is he put up a huge plan of constructing separate toilets in schools at a massive scale. He used to supervise this himself and got weekly reports about how many toilets have been built since the last week. He mentioned they built some 40,000 toilets in the years to follow. And the results speak for themselves. The drop out rate fell to 5% in 2005 and 2% in 2010, which is nothing less than amazing. He further said he aimed to reduce this to zero very soon.

Whats commendable here are not only the results, but also the openness to understand that school toilets could be the reason for children dropping out of schools. Once identified, a plan was made and executed ferociously, unlike in other government schemes in various parts of the country. Kudos to Mr Modi and all the Gujarat government and education officials involved in this. It will make a huge difference to the prosperity of Gujarat when these students pass out and join the mainstream.