This series is certainly the most awaited series for quite some time for me. If the India v Australia series last year was legendary (where I watched two days of test cricket in a stadium), and the India v South Africa series was termed as the clash of the titans, this series has the anticipation like none. Maybe it is because of the landmarks which the first test of the series marks, as this would be the 2000th Test Match ever played and the 100th between India and England. Sachin Tendulkar will be looking to complete a century of centuries and it will be Duncan Fletcher’s 100th test as coach.

Apart from that, there is also the fact that the No 1 spot is on stake in this series. The first match at Lords also marks the return of Dravid to his debut ground 15 years after, when he sparkled with a 95 alongside another debutant Saurav Ganguly who scored a century that day. The number 1 team playing the number 3 team, who defeated Australia easily in the Ashes, in their home ground should make it a cracker of a series. Add to it the fact that there are 4 test matches in a series after a long time will make for a evenly and toughly fought battle between these two teams. 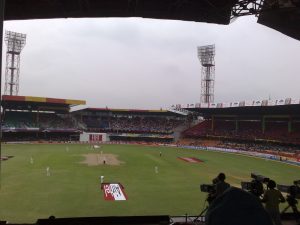 History of India in England

If you see the last three series India have played in England, it has marked the emergence of Dravid and Ganguly in 1996 where India lost 1-0, it marked the promotion of Dravid into the league of greatness in the 2002 series where he scored 602 runs in 6 innings at an average of 100+ and the series proved to the world that the Indian middle order is the best in the world. Add to this emergence of Zaheer Khan and Harbhajan Singh ably supporting Anil Kumble in this series. It also marked the emergence of Saurav Ganguly as an enigmatic leader who showed the world that he is here to stay. The 4 test series in 2002 was tied 1-1, an achievement at that time.

When India came back to England in 2007, they were led by Rahul Dravid. And if Ajit Agarkar managed to hit a century at Lords in 2002,  it was Anil Kumble’s turn in 2007. We won the series 1-0 that year, mostly due to team unity and partnerships and not any big individual performances. With Anil Kumble being India’s only centurion in the series, the more important stats are that India scored 14 half centuries and had 16 half century partnerships in the series, making sure England never got two quick wickets. 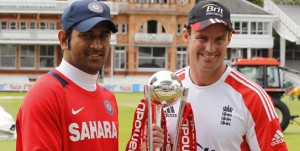 Waiting to watch them in action

Will this series live up to the hype?

This series will be the first time many Indian players play on England soil, as indeed it will be the last time Laxman, Dravid and Tendulkar will be seen playing in England. Add to that the non-availability of Sehwag, the most destructive opening batsman in world cricket today, and you have a series on your hands. England are perhaps in their best form of the moment, and most of their players are fit and in good form. India have been slow starters abroad, and playing England at home will not be easy. But I hope for a tightly fought series, and it will a tough test for players from both the sides as they will be facing quality opposition and that might just bring out the best in them resulting in a truly scintillating display of Test Cricket.

For India, a lot of depends on how well Gautam Gambhir adapts to England where he has never played before. With Sehwag not playing, the responsibility on Dravid and Laxman will be more to cushion in case of collapses and pressure situations. How Ishant Sharma, Zaheer Khan and Harbhajan Singh bowl to Strauss, Trott and Peterson will decide who will hold the honors at the end of the day.

For England, James Anderson, Chris Tremlett and Graeme Swann will lead their attack and test the Indian batsman to the max. India should not take Swann lightly as he is the best spinner in the world as per ICC rankings and will be no pushover. The form of Strauss and Trott has been amazing over the last two years and dismissing them will take a real test of skill and patience for the Indian bowlers.

If the umpiring is upto the mark and the weather does not play spoilsport, we might witness on of the most competitive series in recent times. Let the best team win.