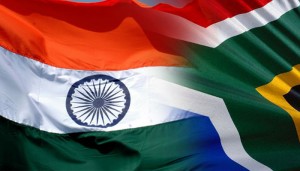 South African cricket team is on tour to India these days. This included a 2 test series which just concluded 1-1. South Africa won the first test by an innings and 6 runs, threatening India’s number 1 position in the ICC rankings. But India came back strongly in the second test to defeat South Africa by an even bigger innings margin, thus retaining their ranking at the top of the table. My point is how can two teams playing cricket with the same players, under same conditions and within 3 days of each other, produce totally opposite results in the two matches. And this had happened many times before and continue to happen in bilateral series, two matches held closely bringing very contrasting results.

So what factors decide which team wins a game. The team composition and the form of the players, the ground and pitch conditions, the home-away factor or is just about the team who handles the pressure and the mind game better. In the aforementioned India-SA series, the players were same, their form could not have changed much in 3 days, the conditions at both the venues were very similar, Graeme Smith (SA’s captain) won the toss in both the matches and batted first, but the results were exactly opposite. Or is it just some strategies that decide the outcome of the match depending on whether they work on that specific day or not.

South Africa totally batted India out in the first test and were looking to do so again in the second test, when Zaheer and Harbhajan got some quick wickets in the third session of the first day. Was it Harbhajan who did something different, or were the African batsmen overconfident after the huge win in the first test? Or was it just luck that Harbhajan’s tricks worked that day and not in the first test. But that this session was the difference between the two test matches is sure, and had SA managed to bat in the 3rd session like they had done earlier, India would have been no more in the number one position.

You might say India adopted, created new strategies to get the SA batsmen after the first test debacle, and they work. Agreed, players make strategies, learn from their mistakes, and Indians must have done so after the first test. But what I am contesting is the totally different results. If SA would have one the first match by 100 runs and India the second one by 150 runs, it would have been ok. When the top two teams fight, you expect close matches and close results. But you don’t expect a innings defeat to either side in two matches being played. An innings defeat means one team’s total domination over the other, and skills / talent to get such domination cannot change over 3 days.

If skills, talents, players, strategies were not the reason for these two opposite results, what were? Does it only boil down to pressure in the end? Does how a team handles the pressure of a game, how it copes with the various ups and downs during the match decide the fate of the match? Is it only the ability to cope over pressure that make some players and teams click on one day and flop on another? In the end it seems cricket still remains a game which is played in the mind as much as it is played on the field.

Sometimes things go as planned, but the biggest test of players and a team comes when it faces a tough opposition and when your plans don’t work. You might have the best batsmen in the world, but if it your bad day, you can lose your tail in less than 50 runs, as has happened so many times with India. You might have one of the best captains and some good positive players, but how you react to your lows will decide whether you win or lose a match. “A ship in harbor is safe, but that is not what ships are built for” — very rightly said by John A. Shedd and the same looks true for players and teams, if you are never tested, you will never know how good you are.

So the recent series showed that the Indian team is not just number one by fluke, and it has the talent and skills to bounce back and turn things around. That is the stuff of champions, and I am proud that I can call my team that 🙂