India has played two matches so far in this World Cup and in both these matches, Sachin and Sehwag has opened the innings with Gambhir at number three. Kohli and Yuvraj make the middle order at four and five followed by Dhoni and Pathan at six and seven. This batting lineup leaves no room for Raina. I feel that only two of our three openers- Sachin, Sehwag and Gambhir should play in any match. Here are 3 reasons India should do so – 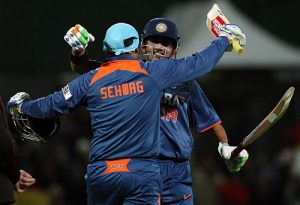 Sehwag and Gambhir opened for Delhi too

1. Adequate rest – All three players, Sachin, Sehwag and Gambhir have been plagued by injuries and fitness issues coming up into the World Cup and playing only two of them in any single match will give adequate rest to all of them. It will be very critical going into the knockout stage of the tournament that all three of them are fully fit and rested.

2. Team Balance – Just as you can’t play 11 Sachins in one team even if he is the best, a team needs to have only two openers to maintain team balance. No doubt all these players are good enough to play in any position, but that leaves Kohli at number 4 and leaves no place for Raina. Kohli has shown tremendous maturity batting in the last year and he needs to bat in the middle of the innings for that, not at the end of it which normally happens if all three openers play. At the end of the innings, Raina could be very destructive but playing all three openers means he can’t find a place in the team. So playing only two of them will give Kohli and Raina their comfortable spots in the team rather than Kohli coming to bat in at number 7 as he did yesterday.

3. Enough exposure to all – Indian top order has failed only 5 times in the last 32 matches which means Yuvraj, Pathan, Dhoni and Raina have very little time in the middle. Playing only two of the openers will give more chance and opportunity for the Indian lower middle order to get some match practice. When we face a tough opposition or when the top order fails, we want the middle order to be prepared to take on the challenge rather than being sitting ducks due to lack of time in the middle. 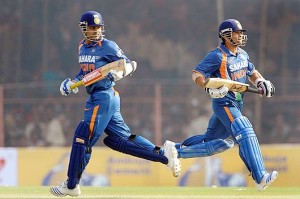 Sachin and Sehwag have demolished many attacks

Due to the above reasons, it will be best for India going ahead into the knock-out stage of the World Cup that all players are rested enough, fit enough, and have got enough time in the middle to be ready for their chance when it comes. The same also holds true for our bowlers, rotation will be the key to ensure Zaheer, Nehra, Sreesanth and Chawla are fit and confident whenever they are required.