Most players come as rookies, show their talents and skills, have their ups and downs and after performing consistently well over many years they are termed as legends by the critics and the media. But the case of Sachin Tendulkar is unique. Right from the first time he burst on the cricketing scene as a 16 year old, everybody knew this boy was special and there was something legendary about him. And the way he has been performing over the last 22 years, he has left all those expectations behind and rose tall among legends themselves. As a cricketer, and as a person, there are many life lessons to be learned from Sachin Tendulkar, and I am listing five of them below –

He has the most runs in both forms of the game, the most centuries in both tests and ODIs, the maximum man of the match awards, the highest ODI score and numerous other records to his name. He is called GOD in India. He has been called the world’s best batsman continuously over the last 15 years, and Sir Donald Bradman saw himself in his batting. Perhaps there is no one else in world cricket today who can take all this praise with the grace and humility that he embodies. Carrying the expectations of a billion people, and constantly improving the benchmarks he sets for himself has been his hallmark. When asked about being termed a GOD, he humbly says, “I don’t think it is possible for anyone to become GOD”

Still the same smile and enthusiasm

Despite having all the records to his name, and after consistently performing well for the last 20+ years, he is still a student of the game. He believes that there is always room for improvement. He says he is always keen to improve his game and wants to focus on the next game rather than celebrating his records and achievements. The same holds true for life too, as we must strive to be its students always and take whatever lessons and learnings life has to offer daily.

He is one man in the team who many would argue doesn’t need to practice. But still he is the one who always works very hard before every series and match. He is always punctual in team practice sessions and makes sure to practice more before an important series. His asking leg spinners to bowl in the rough outside leg stump to prepare for Shane Warne before the 2001 series is well known. He has never sat on his laurels but always look to work hard on his technique and fitness, and that is the reason he is still one of the fittest players at 38 years of age. 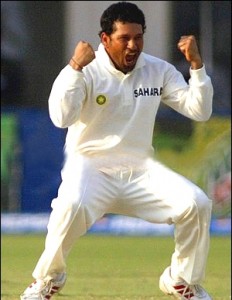 4. Never ending hunger of the game

“I am happy with my performance, but not satisfied”, he has said many times. This after having almost all batting records to his name. His hunger for the game is something which makes his game worth watching. He still has the same smile as he had as a 16 year kid when he plays the game. He still considers every game important and the joy on his face after winning a match or scoring a century tells of his never ending hunger. The hunger to keep scoring runs, to keep his fans happy, and to prolong the misery of the opposition bowlers. If we all live our lives with the same hunger, would there be anything not possible.

His greatest talent is not to pick up a ball early or hit it through the gaps, but to do it consistently for over 20 years, and constantly improving the standards which he himself has set for the world. His discipline in the nets is well known, where he sometimes bats even after the younger players wind up. Tendulkar shows that talent without discipline is useless. His preparation before every game, and his decision making at crucial times as a batsman is for all to see and marvel at. And when everybody else calls him a perfectionist at many shots, he is continuously improving at them for the last two decades with enormous hard work and discipline.