When Ten Sports bought the telecast rights for international cricket in SA recently for $70-75 million, it stage the stage for one of the most intrusive advertising campaigns ever seen on cricket telecasts in India. The recently concluded India – SA series saw advertisements like never before, with the romantic cricket lover suffering the most. The above mentioned series saw intrusive (some might call it innovative) advertising such as L-shaped advertising which reduces the size of the cricket telecast, the two rectangle boxes right behind the keeper (shown on TV, not actually on ground) and advertisements bursting out of the ground (again using animation) during live action. All this made the cricket lover miss the most important moments of the match. For example, in a recent match, when Yusuf Pathan was dismissed at a crucial moment, I had to wait 3 overs to see his reaction to the dismissal as the advertisements followed right after his dismissal not even waiting to show his reactions or the opposition celebrating.

Many people in the advertising and broadcasting business are concerned about the extremely high prices at which TV rights are auctioned and sold. Since the rights are sold as exorbitantly high prices, the TV channels face the pressure of generating revenue through ad sales since the subscription rates are very low in India. They are running a business and not a charity, and hence they have to make sure every second is monetized to recover the TV rights price and generate profit for them.

Purists / cricket lovers, on the other hand, argue that while it may be fine to show advertisement between overs and at the fall of wickets, intrusive advertising while the cricket action is on actually takes away from the experience of watching the game. These advertisement include placement of animated display advertisements (sometimes even with sound) during the game itself. Their point of view is that cricket boards need to strictly mention at the time of selling broadcast rights what kinds of advertisements are allowed so that the quality of cricket is not compromised. 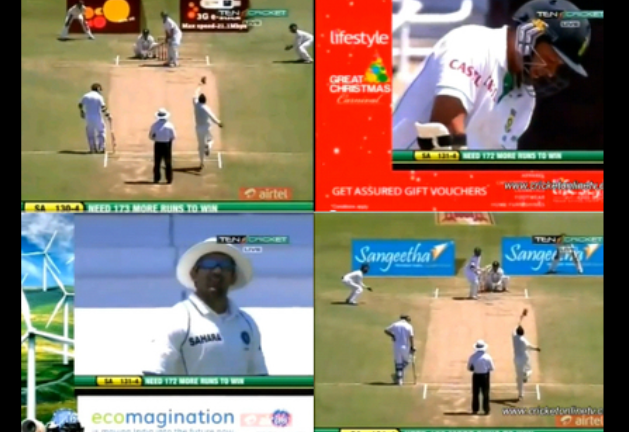 Another issue which plagues the Indian broadcasting industry is very low subscription fees paid by the customer compared to international markets. The price the consumer pays to watch the same channel in the UK or Australia is five to six times the amount paid by the Indian subscriber, leaving advertising as the only way to recover the costs. Moreover, India is a very price-sensitive market, and maybe the Indian consumer (most of them) doesn’t mind the advertising as long as they have to pay the minimum amount to watch it.

So what could be the solution to this problem which is peculiar in the Indian context. One option is to set up clear guidelines by the Indian broadcasting industry and the BCCI about the kind of advertising allowed. They can even limit the number of minutes of advertising per hour like FIFA does, but that might be an extreme step and not feasible in the Indian context. Another option could be to introduce a new ad-less high quality broadcasting option with high subscription fees for the purist. This telecast will not interrupt cricket action but consumers will have to put their hands in their pockets to watch this. People in the broadcasting industry are very skeptical of the success of such an option considering the Indian audience.

But as in everything else, a balance has to be find between showing quality cricket telecast and showing enough advertising to generate revenue for the TV channels. Maybe the BCCI needs to fix a maximum price for the rights auction at which enough advertisements can be shown without affecting the quality of cricket action. Recently Ten Cricket was given a show-cause notice by the Indian government for showing intrusive advertisements during the recent India vs SA series. Timely action by the regulators and specifying the right guidelines by the cricket boards can go a long way in ensuring a quality cricket telecast for the cricket lover.