When I passed out of college and finished my engineering in June 2005, I had appeared for GATE (Graduate Aptitude Test in Engineering) for the last two years to seek entrance to a M. Tech program. In 2005, I scored 97.25 percentile and an All India Rank of 744. Although I was disappointed by this scoring, I still got a call from NITIE Mumbai where they admit students for a PG program in management and IT based on GATE scores. I appeared for the interview, which went well, but was not named in the final list of selected candidates. I didn’t wanted to pursue a M.Tech in any regional college so that meant I started my professional career in July 2005 with InfoEdge India Ltd. Today, I can not be more glad that I didn’t get a good GATE score and could not clear the interview at NITIE. 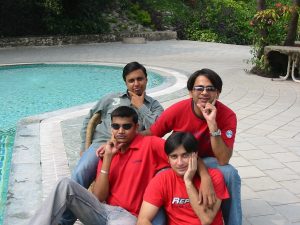 Don't ask why? This pic has an interesting story behind it!!

It has been almost six years in my professional life now. And boy, what an adventure it has been! I call it an adventure because I have done some really crazy things in these six years. I have made great friends (for life) from my days at InfoEdge and frankly, enjoyed and had more fun than what I did during my college and hostel days. I did some pretty good work on 99acres and was leading the technical team of 14 people when I left InfoEdge in 2008. I started a startup (sukip.com and saleraja.com) with my school friends and ran it for 2.5 years. I joined a startup in Bangalore which had only 15 people. I started this blog in 2010, am writing regular articles and poems which are well received and am now working on my first book.

Now I am working at Yahoo! and getting the experience of a multinational corporation for the first time. In the last 10 months or so, I have taken initiatives in the areas of waste management, anti-corruption and now PickaFight. After moving to Bangalore, I have hopped to and from Delhi like anything, attending marriages of Gunjan, Shiv, Saurabh, Kinshuk, Prateek, Gaurav (though I missed Mukesh and Rinkesh’s) and many more friends, many times giving a total shock to my friends and family by landing in front of them out of nowhere 😉 I ride a bike which I never thought I can, have been on rides as long as 800 kms, and in between somehow I also learned French for 18 months, prepared for IAS entrance for some six months and made and lost money in the stock markets at different times. I can’t believe it has been only six years!! Phew.. 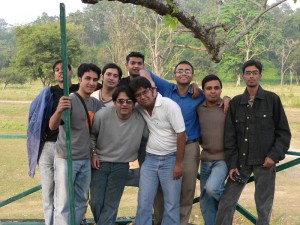 The point I am making is, when normally doing a post graduation has become a norm these days, and even I wanted to do it, I have learned a lot lot more from the biggest teacher which is life. I have succeeded and stumbled, been happy and sad, felt trusted and betrayed, but in the course have gained from life what no formal education could have given. Today, if anybody asks me to trade any one of the last six years for a degree from the best of colleges like IIT, IIM, MIT or even the Harvard, I would say NO. Those degrees might be valuable in another way, but they can’t replace what I got in these past six years.

If I look back at the Sumit from six years ago, I can say I am still the same person at the core, the spontaneous and rebellious one, always looking to break the rules and do something new. But seeing from another angle, I have become a completely different person and I can’t recognize the person I was six years ago. I was a hard core techie then with no intention of going into management, now I have started and shut down a company and call myself an entrepreneur.  My views about life, women, people, friends and family have changed totally in the last six years. It is a new ME now, yet with the same CORE.

How have I changed?

If I was a bustling pot of energy back then, trying different things without any direction and easily exploited by any person, emotion or situation, now the energy is being directed for achieving meaningful goals, while acting more responsibly and being more aware of my duties as a son, brother, friend, and as a citizen. My confusion back then has given way to confidence, my frustration to focus, and my arrogance has been replaced by a sense of respect towards fellow human beings. If I used to think I know a lot about the way this world works and how people are, I now know that I know very little about this amazing world which is full of incredible people.

How am I still the same person?

I still have a lot of fun in my everyday life, still wait for Mondays, still work on weekends (though it was never work to me), still take off spontaneously to go for a vacation or to give a surprise visit to friends and family in Delhi. I still break rules and norms and do things the way I want to do them. I still succeed sometimes, fail other times. You can say that my failures have not reduced but my disappointments have, my results might not have improved but my upsets have gone down, and that I might not have grown wiser, but I am less foolish now 😉 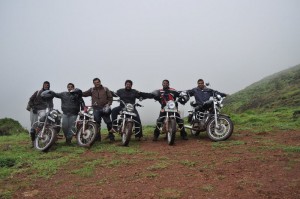 Had to ride 20km off-road to reach here

Life has taught me a lot in these last six years, and it has not been easy either. I can’t erase the memories of my mom undergoing cancer surgery and chemotherapy three times in the last seven years, can’t take back the harsh words I have said to a few people and can’t undo the many mistakes I have made. But who said it was supposed to be smooth? At the same time, I also can’t forget the tremendous excitement when we created SaleRaja, will always miss the amazing fun I had in my first year of work, and can’t thank the 14 people of the 99acres team who made me discover a new side of myself in that one year when I led them.  In a nutshell, life has not been a cakewalk, but if you would ask me “Was it worth it?”, I would say “TOTALLY”!!!

I don’t know if this is pretty much the difference between every 27 year old and a 21 year old, but this has been my story.