It is a very difficult question to answer, and I can take any side and debate endlessly for its merits. One important point from a business point of view is that both are critical, and there can be no successful business without either idea or execution. In a way, both are inseparable. What will you execute if you don’t have an idea to start with? And there is no such thing as the perfect idea. As you get out in the world and start executing, your idea will obviously change and refine itself based on market feedback and knowledge of realities which you were not present to earlier.

For Idea
Start up is the art of executing an idea, so obviously the idea is critical. If you are hell bent upon executing a stupid idea, no matter what your execution is, it just doesn’t add up. The idea in turn is the key to attract good investment and people, which are critical for the execution. A bad idea will simply not get enough traction to survive in the market place. A great idea is a way to attract other resources who will do the execution. Obviously execution is important, but it is zilch without the idea first. In short, the idea must be executable for the execution to matter.

For Execution
An idea is just an initial vision for a product, or a solution by the founder. To develop it as a business, the whole business model has to be considered. Who are your customers, how will you reach them, what is your USP, what will be the key resources for you, and most importantly, what all will you incur expense for and what all will fetch you money. An idea without answering these questions is well, just an idea. Sometimes no matter how great your product or service is, you simply can’t make the economics work and you end up in the dead pool.

The choice of market, the team, its persistence, timing, and how good you are at adapting the business along the way based on what you learn all comes in the execution sphere. And it is very important to be mature enough to realize that no idea is the ‘final’ idea. You need to pivot your idea and product, and try out different products, marketing strategies, revenue models before you find a product market fit. For example – We all know solar is a good idea, but it has not been successful because there are huge upfront costs which customers are unwilling to pay. But there are many companies like Simpa who have changed their business model by partnering with banks and offer their solutions to the customers at the same expense they are incurring now. The idea is the same, but the execution is the differentiator here.

The bottom line – execution is required for any enterprise to succeed, either with a good idea or a mediocre idea. Of course, nobody can help you if you have a bad idea. 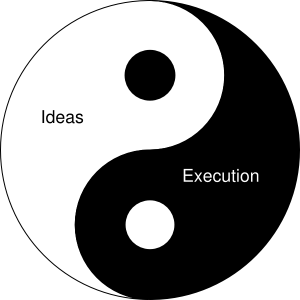 Derek Siver’s Explanation
He believes an idea is just a multiplier, and formulates its relation to execution as follows:

( My) Conclusion
Seth Godin says that just about every successful venture is based on an unoriginal idea, beautifully executed. Nearly every startup morphs their idea, often in very significant ways, once they enter the market. I would say that both are inseparable, you have to continuously refine your idea while you execute, and that is the key. So I would probably put the split at 40/60 in favor of execution. But there is hardly any business success story without both.